It’s April this week, and it finally feels like spring is on it’s way to Spokane!! Looking back over my March photos made me realize what a busy month it was. We got a lot done in March after hibernating for most of January and February. I’m sure some of that was because of N’s arrival, but I think a lot of it had to do with all of the snow!!

March started with a couple of sunny days! Or at least, moments of sunshine. N’s room faces west, so we get the most glorious sunshine in the afternoons. It’s really amazing. N isn’t a huge fan of the sun streaming it, because it lands right on the glider and sometimes blinds her. Oh gosh, I have to rave about the glider we got. We ended up buying it secondhand from another mama, and it’s been seriously the best thing we’ve purchased. if you’re planning on having a baby, buy the best glider you can afford. I promise, it’s worth it. I spend so many hours in ours!! Anyway, there’s just something about soaking up that sunshine while nursing my babe. Sometimes I just want to rush through those moments so I can get back to whatever we were doing, but I remember that she’s only going to want to snuggle me for so long, so I’m trying to soak up the moments — and the tiny baby toes. 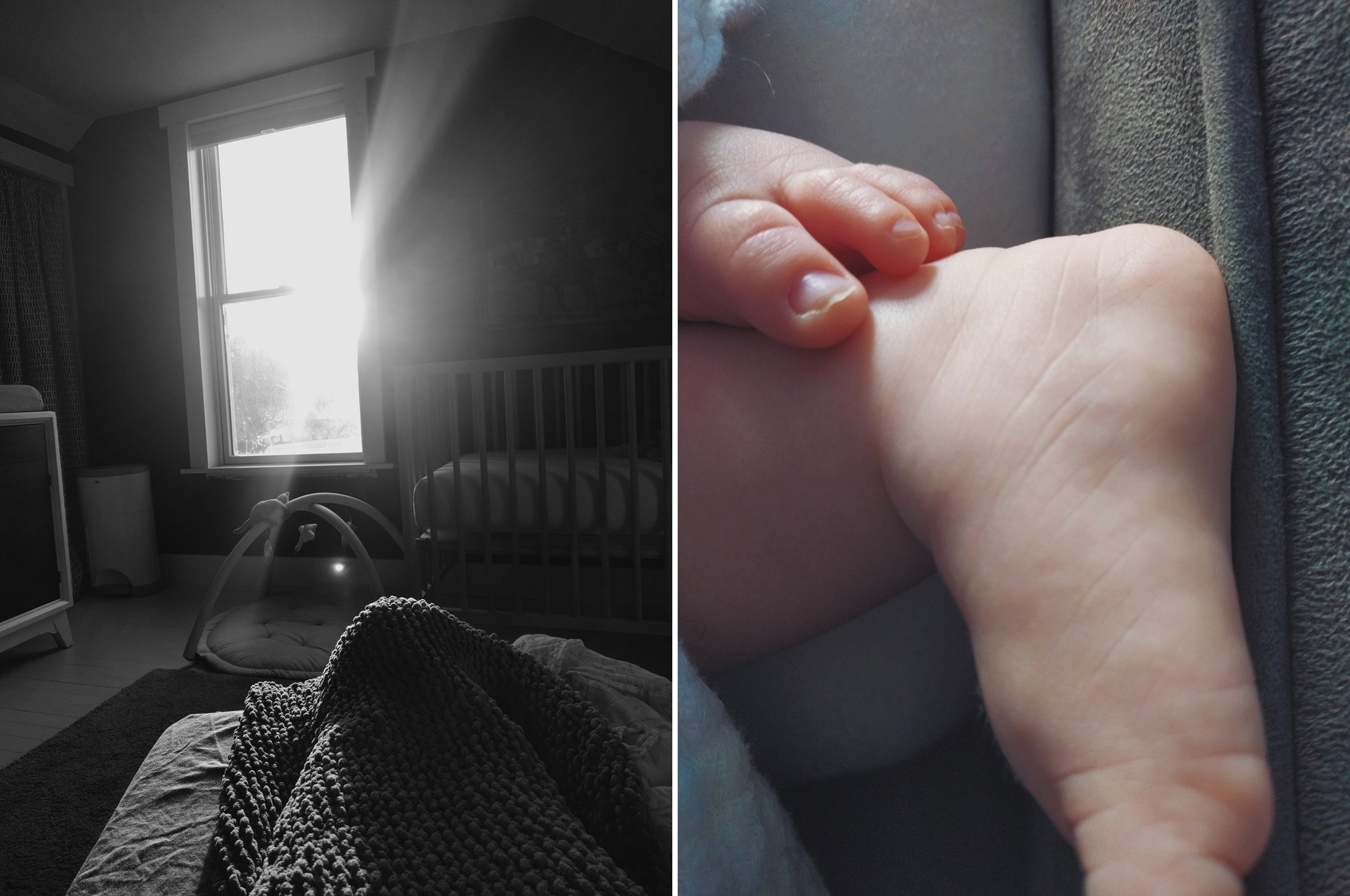 We’re heading to Germany in May, and so we decided to fly down to Portland for a single night (we’re crazy, I know) to test out this whole “flying with a baby” business. It was a good learning experience, for sure! N did pretty well on the flight, and we learned a ton from our adventures. Portland is a fantastic airport for kids and mamas. There is a lactation/pumping room near the Alaska gates (just past security). We popped our heads it to check it out — it’s roomy! — but didn’t need it this time, plus they have a nice family bathroom near the Starbucks and the Alaska gates, which is where N and I grabbed this quick selfie. Also: hallelujah for babywearing. We went to Portland without a stroller, but with two baby carriers! N didn’t nap very well, with all the travel and new adventures, so being able to snuggle her in close meant she would nap on us. She even slept through her first adventure at Powell’s, but don’t worry, we bought her a book to commemorate it. 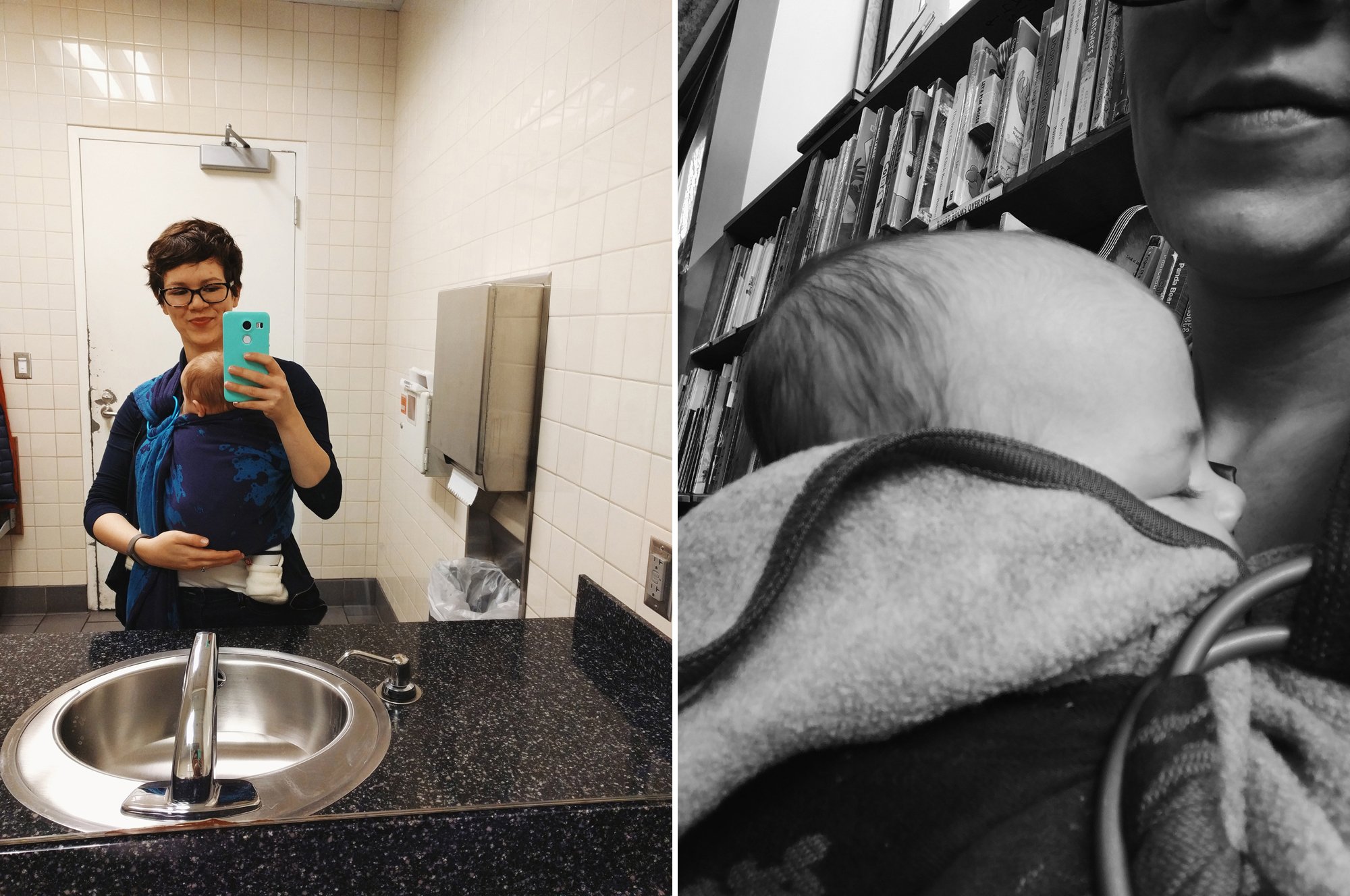 Since we knew we were staying in downtown Portland, we traveled extra light — no stroller or carseat — and just took the MAX down to our hotel. Surprise, surprise, our super travel baby was bored and slept. It was a little annoying at times, but for quick trips, I think it’s great to travel so light (we were still carry on only, even with bring N’s travel crib along). She was pretty worn out from the trip – we all were – and napped a lot the next few days. She doesn’t normally fall asleep after nursing that often, but she did that week. Lola and Shadow also decided to come snuggle up in N’s room while she napped on me. I took advantage of the free hour to start reading a book, The Secret Life of Violet Grant, which I ended up devouring and stayed up late to finish.

March also was the end of my maternity leave, and I started working again regularly, instead of just trying to keep up with my emails. Thankfully, H has been able to make his schedule flexible and has been home one afternoon a week, but I end up working late in the evenings too. That’s not going to work long term, so I’m working out a plan for the summer. Eventually, I’ll even actually get things together and do work. Anyway!! Of course, I swear, on the days when I needed to get a bunch of work done, N would realize that. She won’t nap and she’s super fussy, and needs to be held all the time. So, mama naps and baby wearing are the only way I can get even the littlest things done. 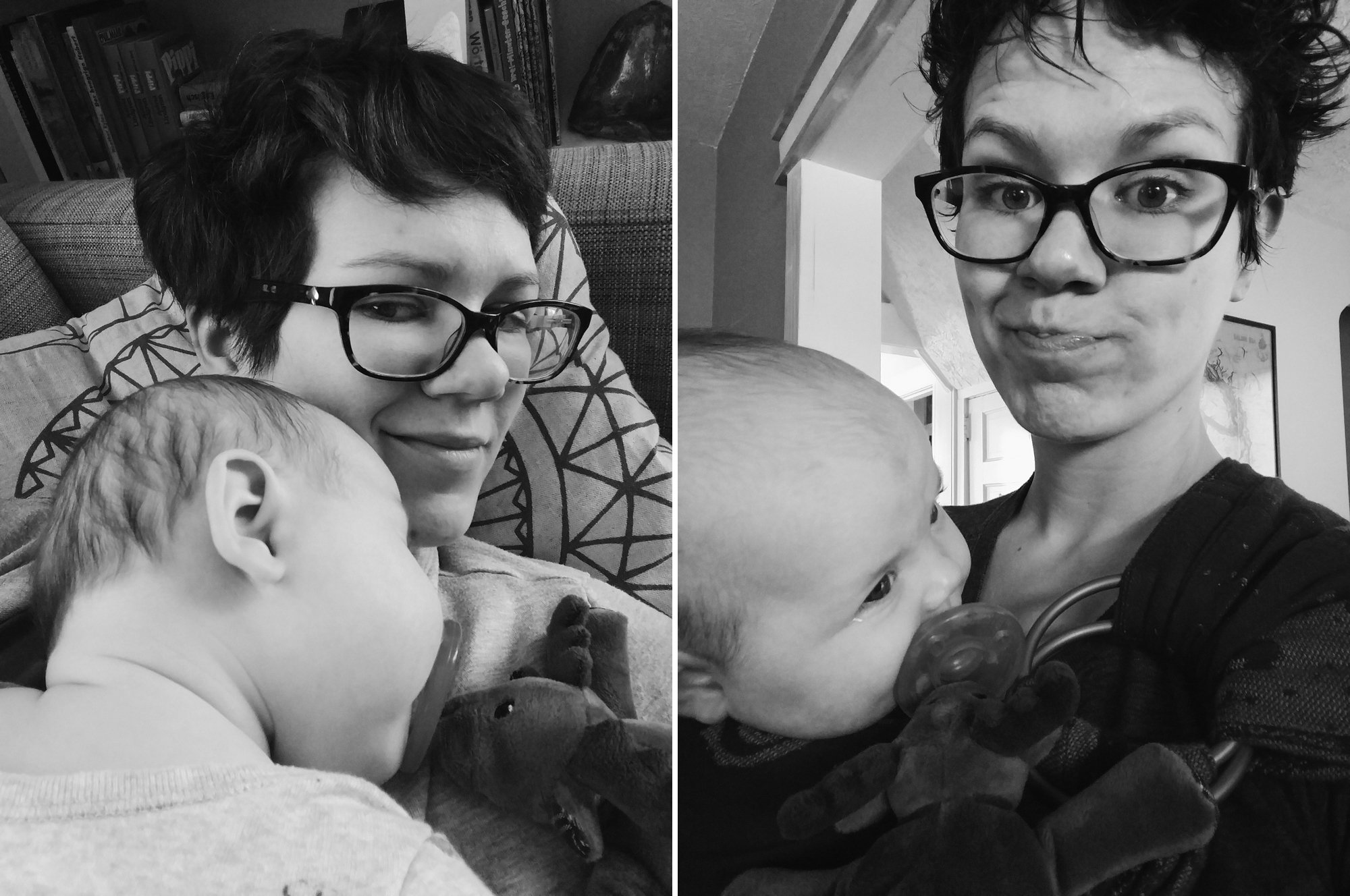 I had my friend Alyssa (check out her Etsy shop) make this sweet Gonzaga headband for N, and she wore it all through March Madness! She was very unhappy to find out we didn’t win the championship, but she’s a Zags fan for life. She was super fussy during the final 4 game, until I turned her around to watch the game. Starting her young! 😉 In business news, my new business cards and thank you cards arrived from the printer, and I can’t wait to send them all out to my couples and new clients this year!! 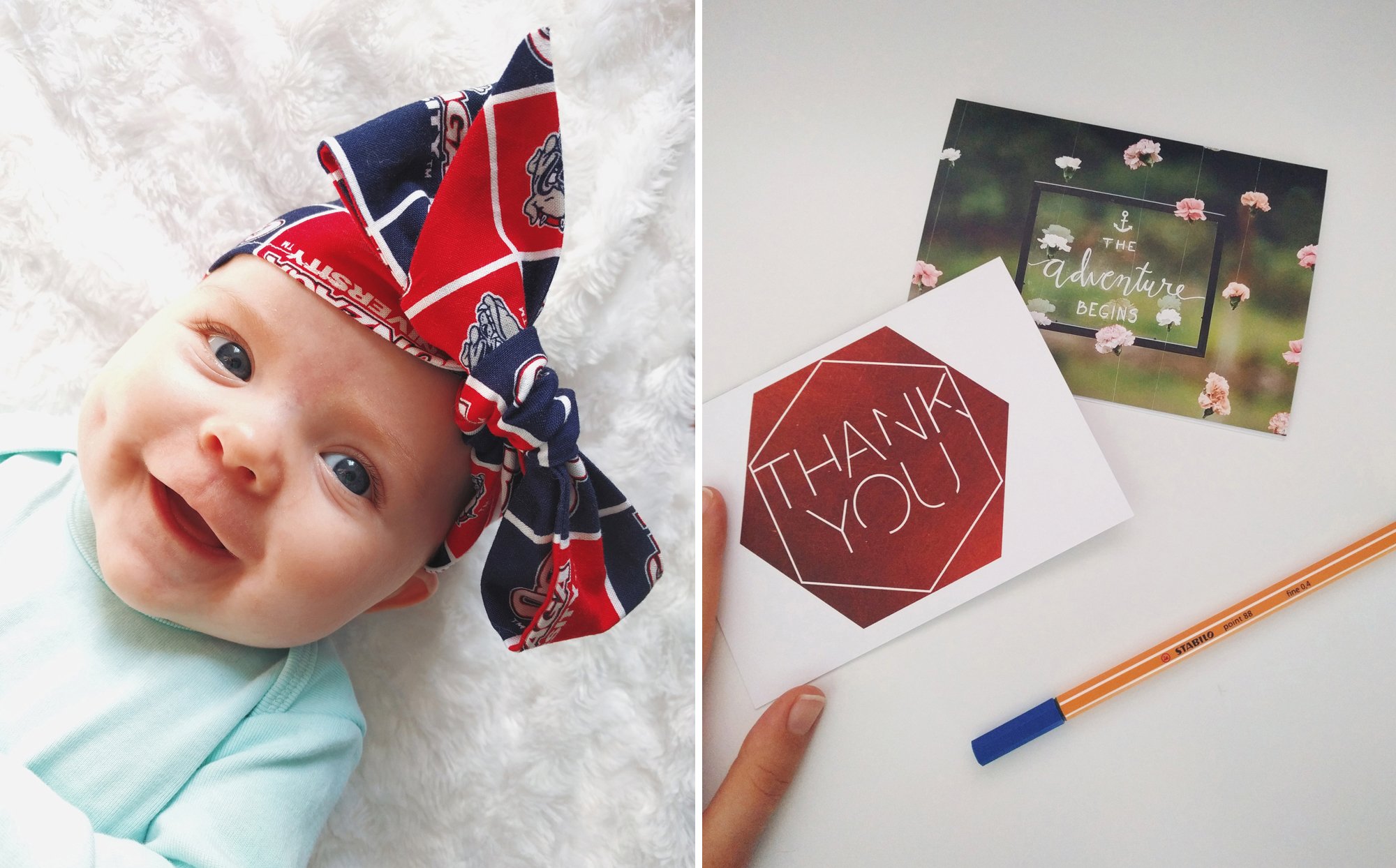 Miss N was wearing her Gonzaga outfit a lot for March Madness, we were super happy about that, for sure! My brother came up for a day to help us build a real fence around our veggie garden. We had put up some fencing last year, after we realized that Shadow didn’t know the difference between the garden and the grass, and just ran through all my plants. 🙁 But he started jumping that little fence, and we had to build a new one! Shadow, being the quirky pup he is, decided that the pile of sawdust from the table saw was a great place to lay down. Crazy pup! Lastly: some gratuitous chunky baby legs. N had such skinny legs when she was born, but now it’s all rolls! I can’t believe how fast she’s growing, and I am so thrilled that it’s April and spring is here!!!

Some of the links above are affiliate links, but all links are to things we love and use.