I fell off the face of the planet in late April, thanks to a cold that wouldn’t go away, and too much work on the house. By the time I was starting to feel better, I was too busy catching up on all the stuff I’d let fall to the side, decided to take a break from all things internet to clear my head, and then we were off on a trip to Europe for a little vacation time and a friend’s wedding. And since we got back two weeks ago, I’ve been scrambling to catch up. Oh, and it’s wedding season.

I’m tired just telling you all of that.

Because of being sick, my photos from April are…pretty slim. And then, on our trip in May, I was so busy using my new favorite camera – this Fujifilm Instax Mini 90 that I bought in April – and my Nikon FG-20 film camera, that I didn’t take many photos with my phone. I’m still waiting on my scans too, but once I have those, I’ll share them with you as well!

Like I said, the photos from April are pretty much non existent. Before I got sick, we drove down to Mattawa to celebrate my dad’s 60th birthday! Which was exciting, and kicked off the last two months of travel. When I wasn’t sick, we were doing work on the house. Our built-in bookcases have been thisclose to being done for weeks, but now that I’m better, and we’re, ya know, HOME, we should be able to finish them out. Which is great, because my books are crying from being in boxes too long… 😉 They have totally transformed our living room, and I cannot wait until they’re ready to fill with books!

One of my favorite perks of being my own boss is being able to travel with H when he has work trips. He was at the Suncadia Resort for a couple days for a conference, and while I spent most of the time working on my laptop, I did sneak out on our last afternoon to read a book by the pool (pro travel tip: always bring a swimsuit) because 78 degree days in April deserve to have some pool time. We’re already hoping to come back here some time for a weekend with our pup because it’s dog friendly!

May started off…at a run. H ran his 2nd Bloomsday (my mom ran her 3rd!) and my dad and I cheered away from the sidelines. H was awesome, coming in at just under an hour for the 12k, which shaved 10 minutes off his time from two years ago.  He said it’s apparently much easier to run with you’ve been training with a dog as your running buddy, because you’re not getting pulled every which way. 🙂 While I was sick, I had started re-reading some of the Harry Potter books, and while I was trying to finish one early in May, Lola decided that I shouldn’t read, but instead, should pet her.

In late May, we flew off to Europe. And here’s where I get to geek out. I’ve been dying to visit Greece since…forever. And we were finally able to squeeze in a short trip, along with our trip to Germany for our friend’s wedding – as guests! – and it was a dream come true. Many many thanks to H, who put up with me dragging him all over old buildings and repeatedly freaking out about how something was over 2,000 years old. Thanks, babe. Below is a panoramic view from the Acropolis, which was sadly, being renovated and covered in scaffolding, but still very impressive. 🙁

Going to Athens did allow us to cross another city off our Olympic List. [We’re trying to visit every modern Olympic site, so far we’ve been to: Vancouver, BC; Munich & Berlin, Germany; Beijing, China; Paris, France; and Athens, Greece] This is the Panathenic Stadium, which is super cheap to enter and has an awesome little museum of Olympic Torches in the catacombs. And, you know, is built entirely of marble.

From Athens we flew to Mykonos, where we spent a couple days exploring the town and beaches, and went to Delos, which is another archaeological site. There we climbed a hill (I wanted to call it a mountain, but it wasn’t) and were able to see a bunch of the surrounding islands. The Aegean is very cool, and I’m a fan.

A little contrast here: on the left, a photo of the two of us at the Acropolis. It was sunny and warm (~82 that day, I think). Five days later, we arrived in Germany, and it poured (and I think was ~57 that day). Only about 3 hours by plane, but such a different world. It’s so hard to pack for travel in May, because you never know what the weather will be like!

Lastly, we entered the US through Detroit this time around, which I have never flown through. Our Global Entry cards made it easy as can be (seriously, 10 minutes for immigration. We waited longer for our luggage), and had plenty of time to check out this cool, underground walkway between terminals. The walls change color with the music….although this was technically on June 1st, I’m including it as the end of our trip! 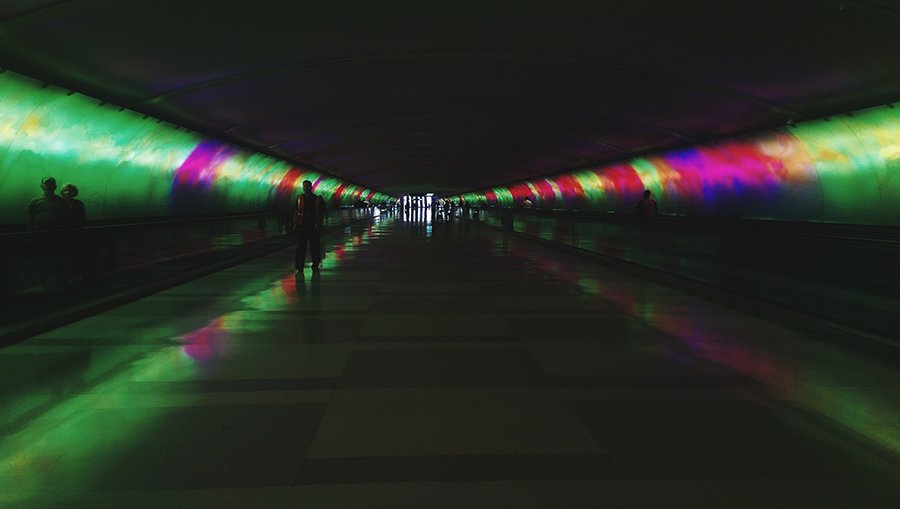 And that was it! Now it’s June, and I promise not to be late on the next recap post. 🙂

All photos taken with my HTC One M8 and edited with vscocam.

This post contains Amazon affiliate links, which means I get a little bit of money if you use my link to buy the item. I only recommend products I love (or want), so whether you use the link or not, I hope you find the information useful!