I was pulling all the photos together for July’s post, and I kept saying to myself, there’s no way we did all these things in July! And, wait, did I not get photos of XYZ thing either??? Haha, I guess it was a busy month. It feels like just a couple days ago, we were in Portland at the end of June, but now it’s the almost the end of August and summer is basically over. This is a long post, because it was SUCH a busy month. Not sorry!

If there is any downside to my job, it’s that summer is my busiest season and I don’t have enough time to enjoy every minute of the summer. But, as you’ll see, I managed to squeeze in a little hammock time last month.

1. I got these adorable glow stick ears at the conference in Portland, and little miss wanted to wear them around. Of course, she won’t ever wear a headband…

2. Walks with the family. With it being light so late, we try to get out for a walk and sometimes a little playground time after dinner and before little miss goes to bed. Sometimes we just play in the garden, but basically we’re doing everything we can to soak up every ounce of sunshine this summer. 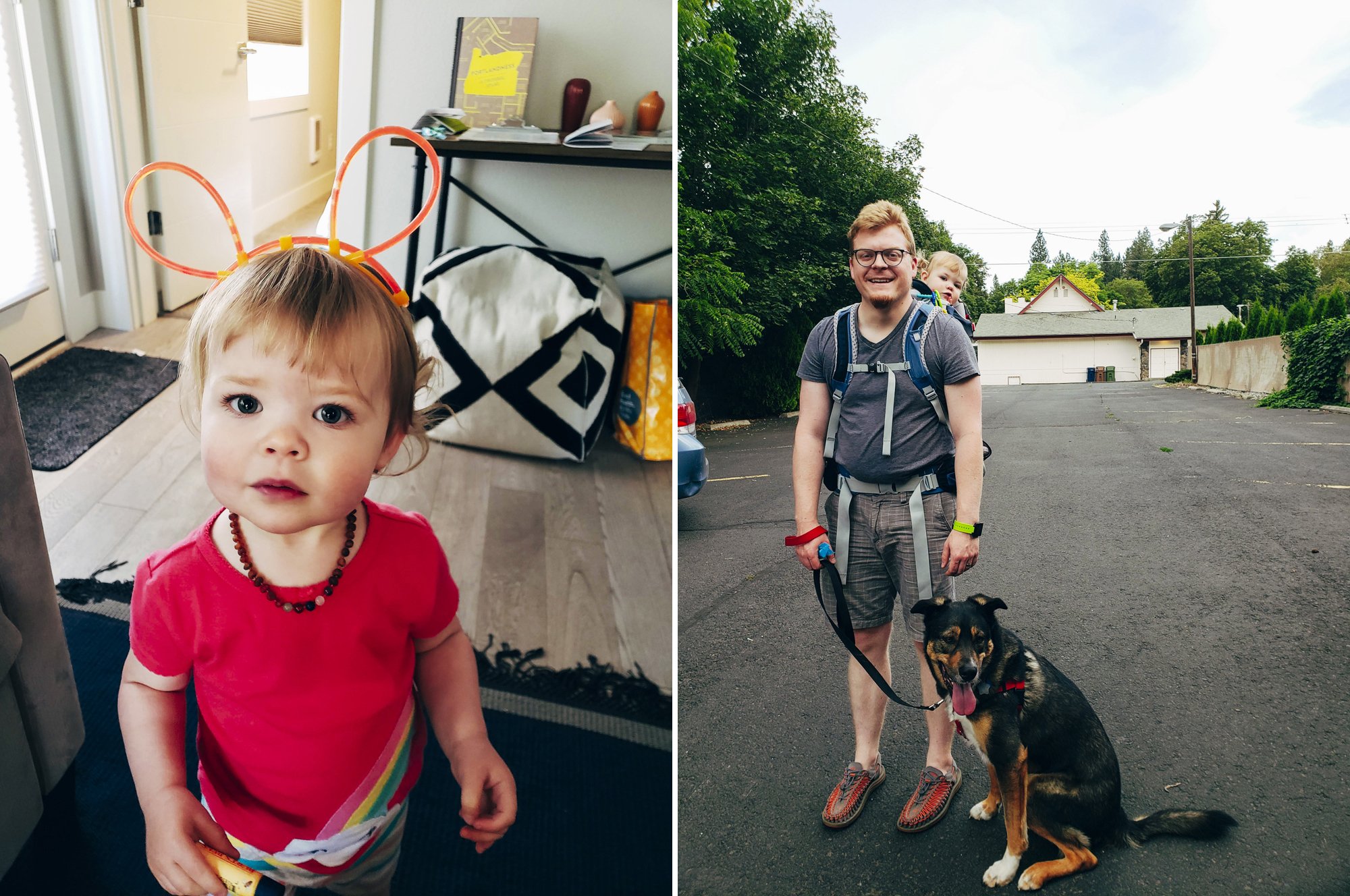 3. We made it up to Greenbluff for a family day and picked a load of blueberries! Someone had a blast picking them and shoving them in her mouth, and we even convinced her to put a few in the bucket. However, I think the highlight was getting bounced around in the wagon. She kept squealing with glee.

4. An inflatable pool, the greatest swimsuit ever (thank you, baby Gap), and a sunhat have brought us hours of fun this hot summer. She loves splashing around in the pool, and then running throughout the yard to dry off a bit before hopping back in. Maybe next time we visit the ocean, she won’t be so against going in? 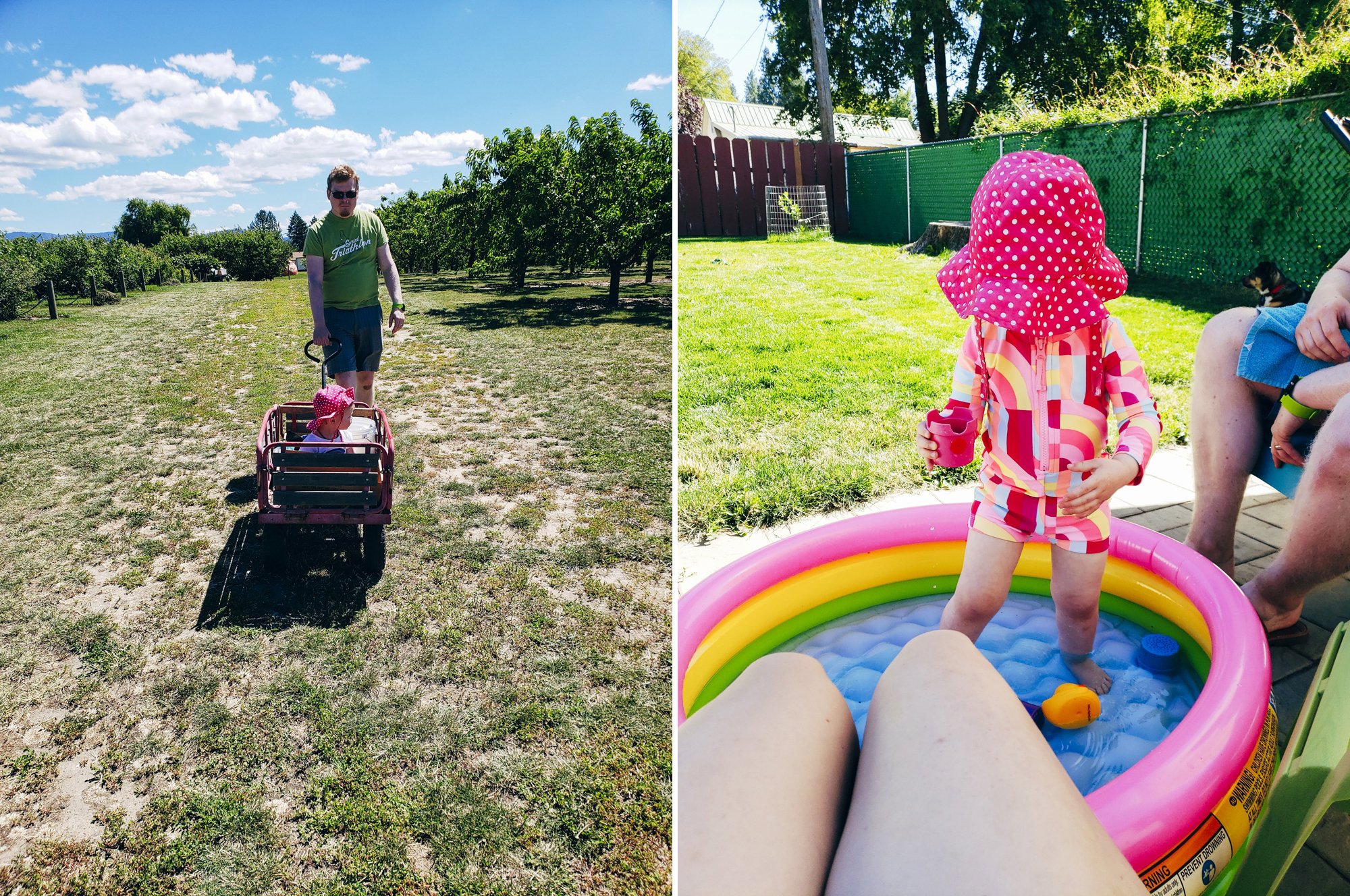 5-8. The biggest thing we did in July was get the floors refinished upstairs. It’s something we’ve dreamed of since moving in and finding out that two of the three bedrooms had original hardwood underneath, but we met with a contractor a while ago who told us it wasn’t worth doing, and then never sent us a quote. So, thank you to our friends who had some work done on their house recently and recommended I reach out to their floor guys. I would 100% recommend them, and if you’re looking for someone in Spokane, drop me a message and I’ll get you their info! They were fast, kind, and let me hop up to take photos as much as I wanted (which was a lot).

Freshly sanded – the first coat going on – after the first or second coat dried – all done and furniture starting to come back in (before we put the rug back down). 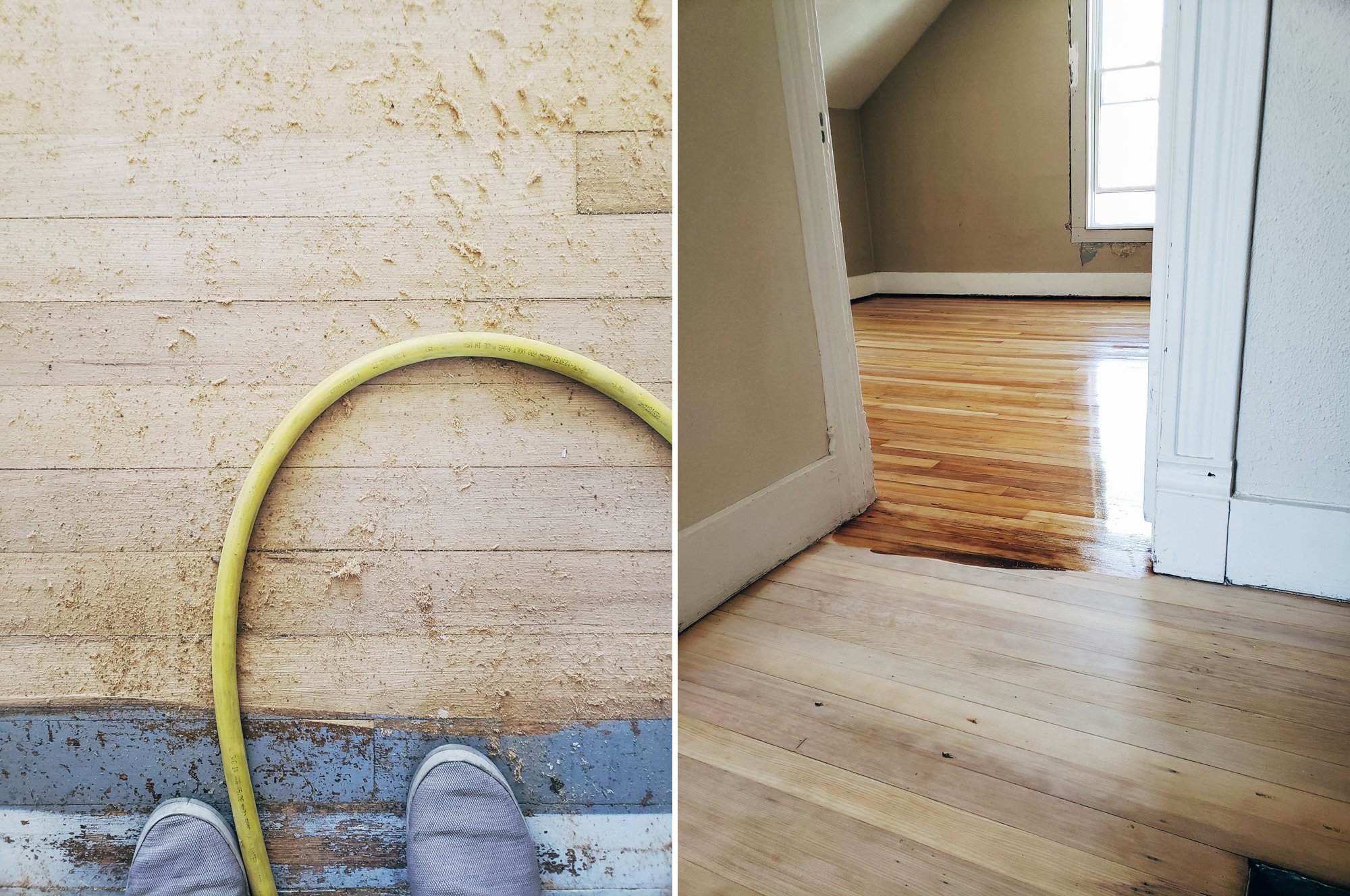 9. THIS rarely happens anymore, but getting your floors refinished is hard work and sometimes you just wanna nap on mama. I’m trying to enjoy these moments instead of stressing out about all the things I needed to do while she napped. I know before I know it, she’ll be off to school and I won’t have these snuggles anymore.

10. I stopped by the beautiful library at UW after a meeting and had to snap a photo of this bookshelf. Remember: divided we fall. We are stronger together, we are a common people who should all want the same things – life, liberty, and equality. 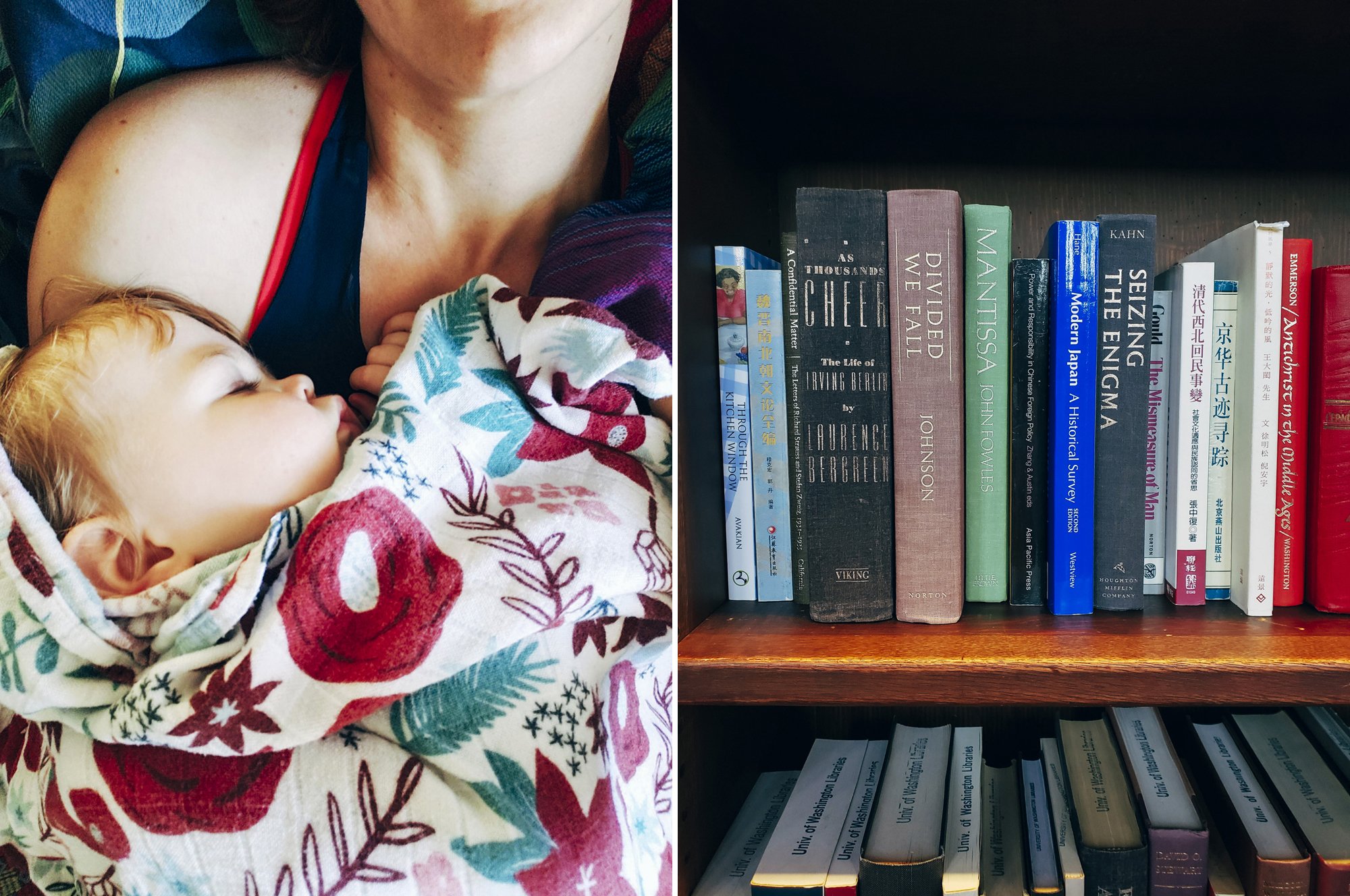 11. The stairs at the library at UW are so good. This building is beautiful and it almost makes me wish I had actually transferred to UW. Almost. #gozags

12. The green was gorgeous on such a beautiful July day, and it was calm and fairly tour free (the same could not be said for other areas of campus). College campuses just fill me with so much hope and energy. And make me want to buy school supplies – haha! 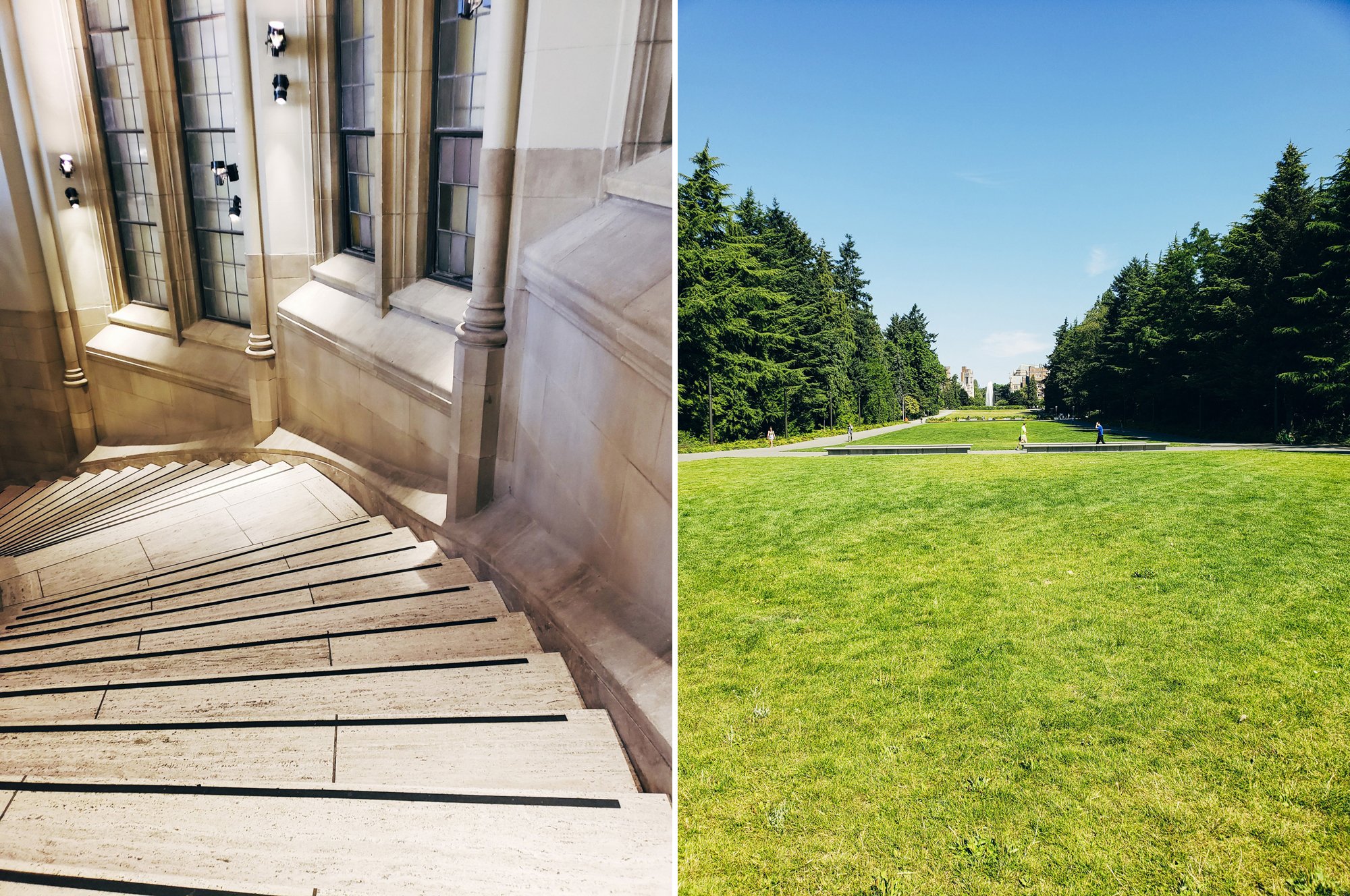 13. One of the strange perks of my job is getting to do crazy things, like climbing up on a rooftop to photograph the street fair. It was both exciting and terrifying, climbing up a ladder to a roof with my camera in my hands, and then making sure I wasn’t too close to the edge. I could even see my house from the roof (not pictured).

14. Hammock time to recover from shooting street fair and then an event in the same day. I was exhausted, but hey, this little lady was around to keep me company and play peek a boo while I recovered. 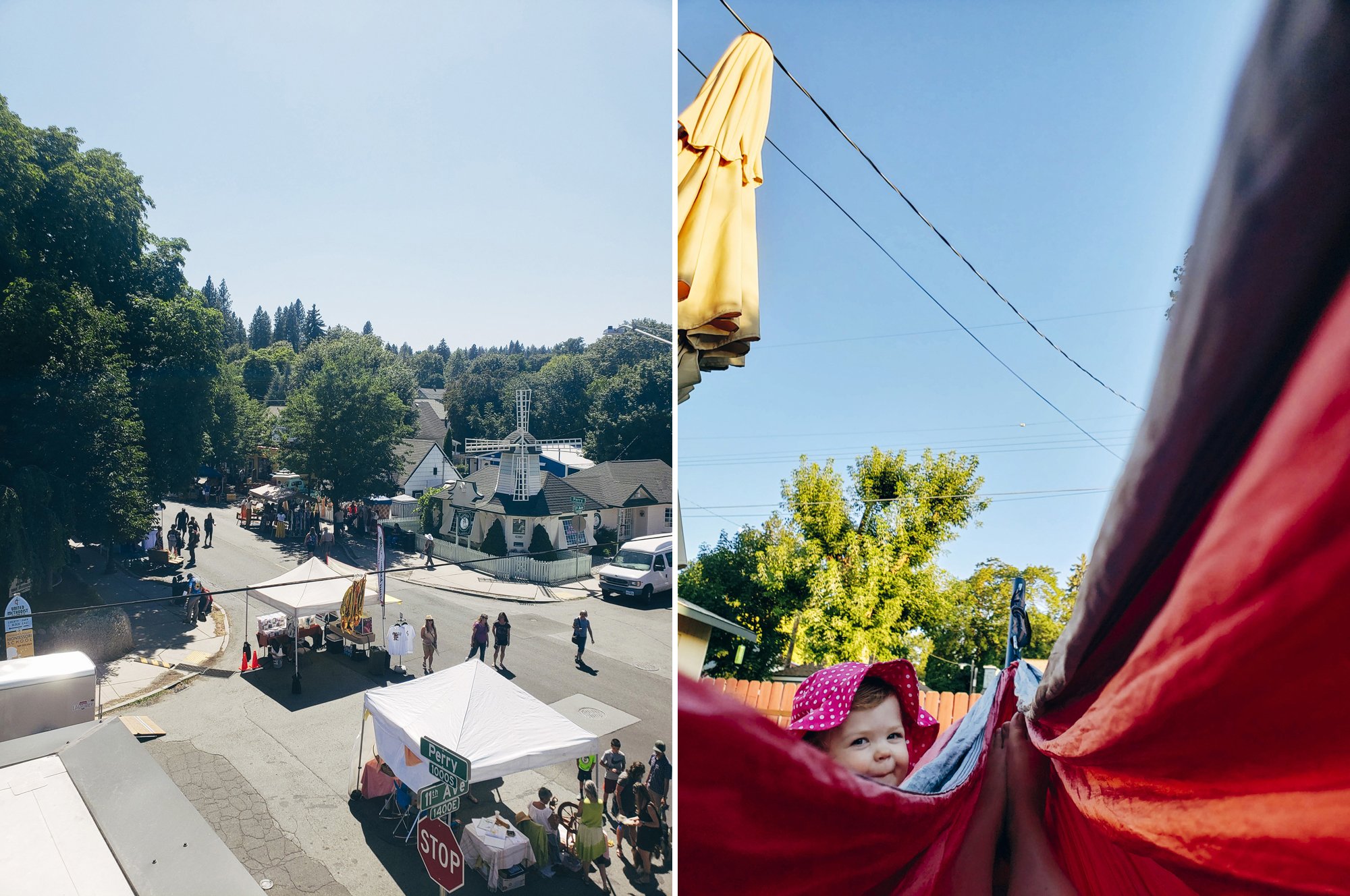 15. I’m super thankful for a sweet husband who says ‘you go alone to pick berries, we’ll do stuff at home’ and then I can pick tons of berries for us to make jam and freeze them because our toddler is a blueberry monster and we go through so many of them every week.

16. Out of focus and I really don’t care. She’s gone through a phase again where she’s not a fan of babywearing, but that day she wanted up with me. And then proceeded to blow raspberries on my back and giggle while we made lunch. That dimple gets me right in the feels. 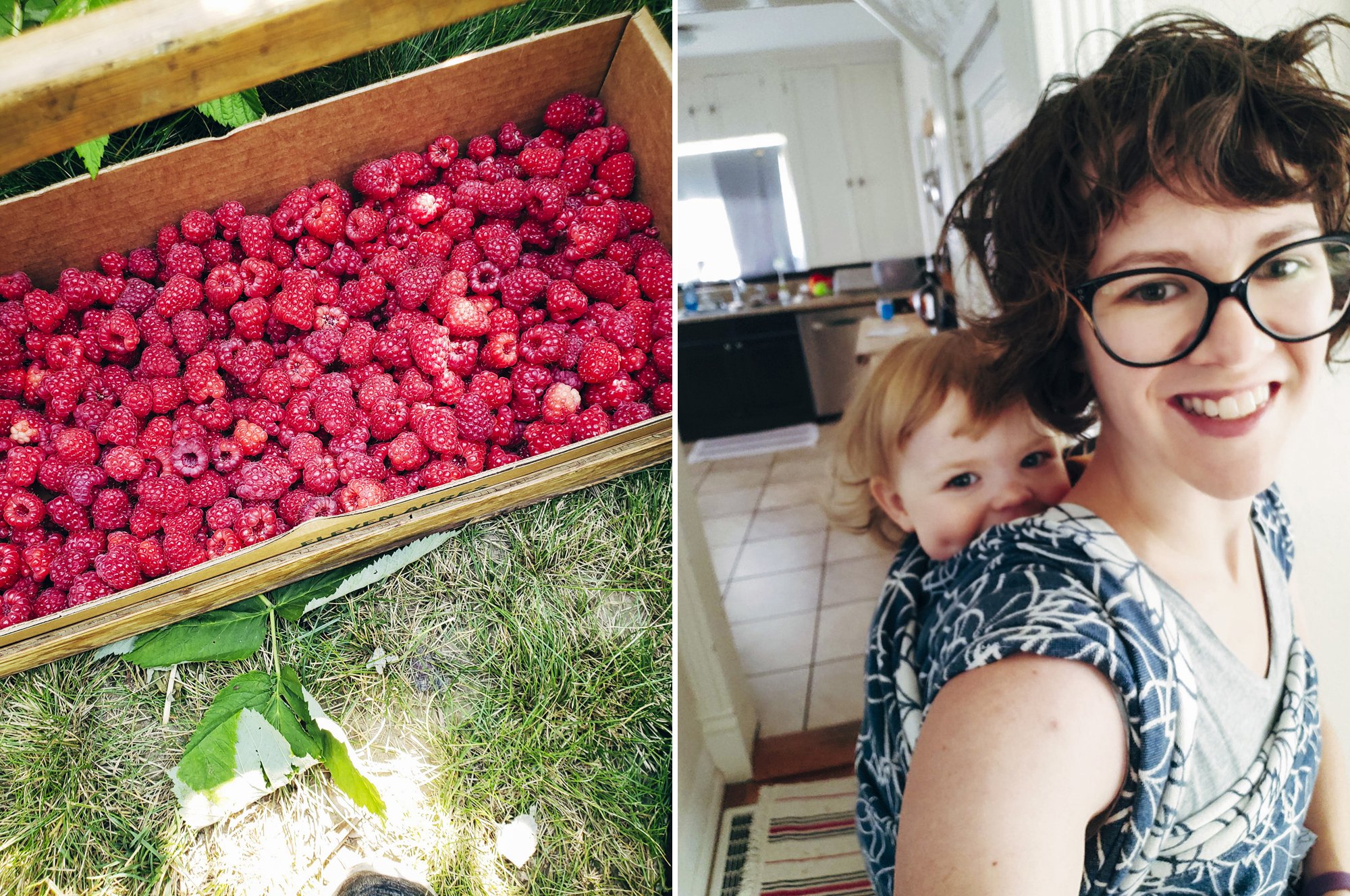 17. I shot an elopement up at Mt. Spokane and it was so dang pretty! Right after I packed all my gear into my car, it started raining! And it was only like 72 out. By the time I got back to my house an hour later, it was 93 and sunny. So crazy that it’s so much cooler up at Mt Spokane!

18. If you’ve ever wondered what the best thing you can buy for your kid/spouse/yard/house is, it’s a hammock and a hammock stand. We use ours nearly every day from May-October, and the since it’s been so smokey and we’ve been inside more, we’re all a bit cranky. I’ve napped in it, read stories in there, and snuggled this silly kid (and my husband).

19. Remember those blueberries I bought? Yup. Getting ready to freeze them with my favorite kitchen assistant. Who’s wearing an apron that once belonged to my grandma or great-grandma.

20. And…boom. It was a busy month and sometimes you just gotta crash out in the back of the car with your bunny.