Oh my gosh, January feels like it was FOREVER ago. I think it’s because the weather was decent in January, and then got to be so nasty in February. I feel like January was last fall, instead of just two months ago.

Real talk: I was going to lump January and February together, but then I started looking through our vacation photos from Maui and I just wanted to post them all and this post was getting long. So…here’s a long, Hawaii-less winter post! Hahaha, I’ll get to February soon!

1.  Little miss got these Mega Blocks for Christmas and they’re a huge hit. She plays with them almost every day (and loves to Duplos at Grandma’s house just as much). I love that they’re in a bag that she can’t *quite* open on her own yet.
2. I bought another baby carrier. Yes, it’s a problem, and no, I don’t care. This is a wrap conversion Tula, for those of you who care, and it’s so soft and cuddly and worth every dang penny. Also, I’ve sold two carriers this month, so I am doing my best to keep it down! 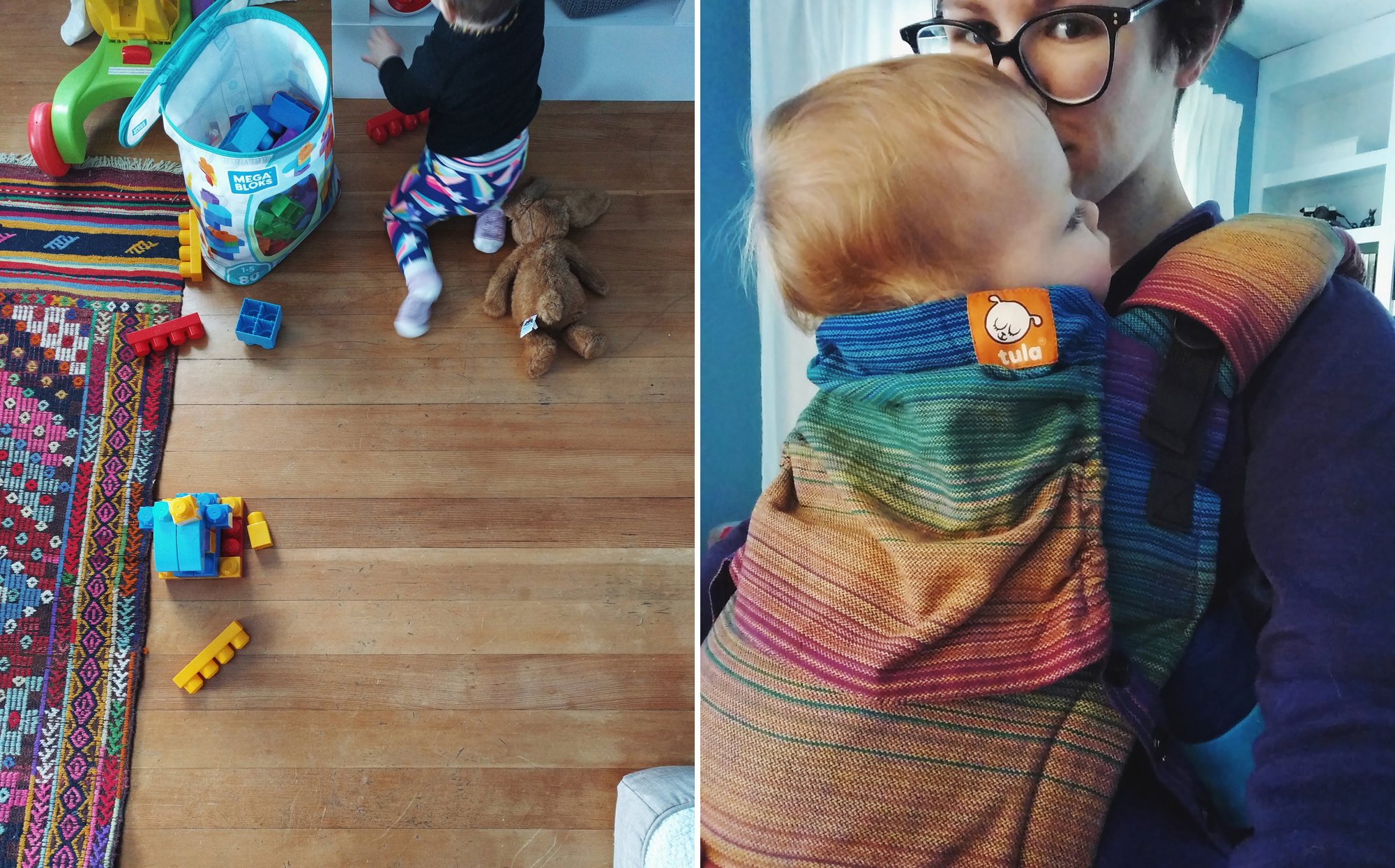 3. This was the first time we ordered her a meal. And she ate almost all of it. I’m always impressed by how much she tucks away, but then again, I’m also impressed by how she never stops moving during the day. Toddlers have so much energy! 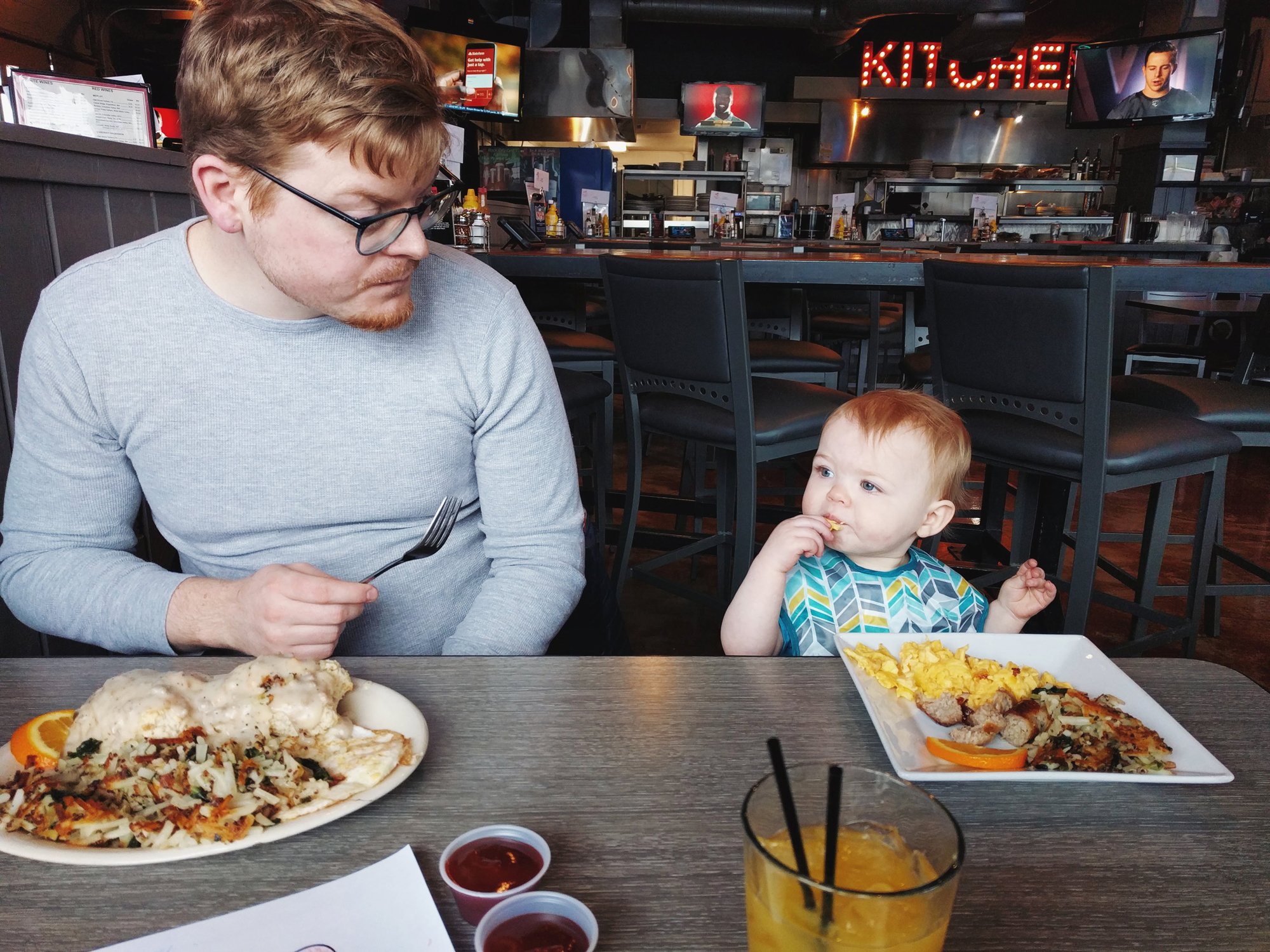 4. The power went out one night – of course right during dinner. So instead of making dinner, we had cheese and crackers by candlelight (and construction flashlight – thanks for the Christmas present, dad!). Then, since the power was off and the temp kept dropping and dropping, we brought little miss into bed with us. Oh, boy. First, we made the rookie mistake of forgetting to check which lights were on, so they all came on at like 3am – haha. Second, we’ve more or less never coslept, because our girl likes her space, and none of us slept very well that night. It was an adventure!
5. When you open the wipes container in your diaper bag and pull a bunch out, and then decide to clean your mama’s desk, you get photographed. Also: I wish I could take credit for those baby blues. #getsthemfromdadsfamily 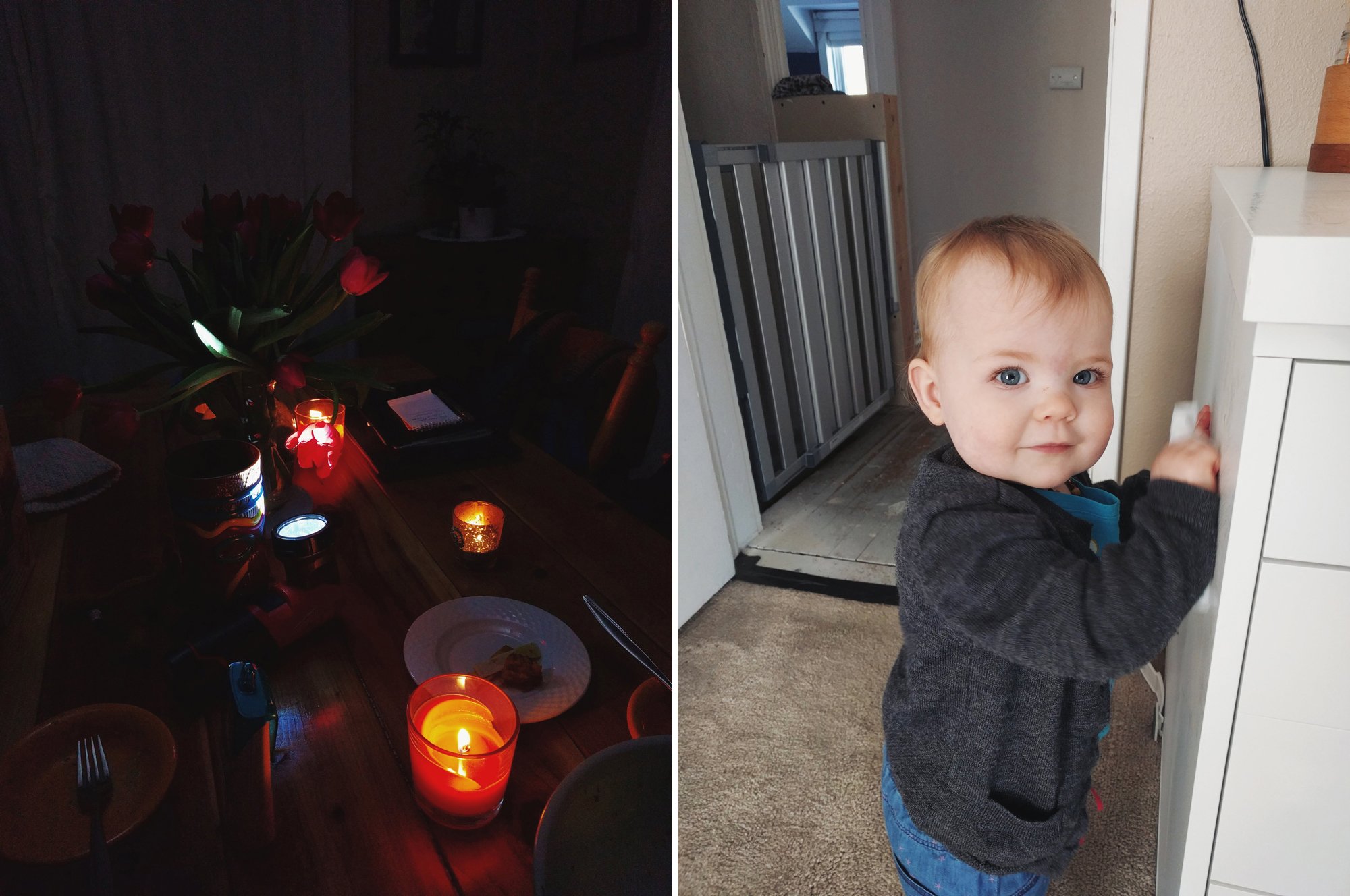 6. Someday, I’m going to write a post about self care and self employment and motherhood and balance. Until that day, I’m going to try and squeeze in an occasional night out with girlfriends where we eat way too much sugar and laugh so much and dream up crazy plans for businesses and vacations and homes.
7. We got a Mobius membership in January, and we’ve used it a bunch. [Stop taking photos, ma, and just let me rock this seesaw.] I love having a membership because we just pop in for an hour or so, work out some energy, and when she gets cranky, we bounce. And the mess of a water table or rice table doesn’t come into my house. Win!

8. Sometimes I can’t believe how well these two get along. It’s absolutely adorable. She loves to climb into his dog bed and play with him and his toys. Or just climb all over him like a jungle gym.
9. January had a few nice, clear, days, and with next to no snow outside, we took our walker toy out and ran around on the patio with it in the rain chasing the dog.

10. Hikes! You’d think I snapped this photo a couple days ago, except for the fact that my kid is bundled up like crazy. We took a lot of nice, long, walks around the neighborhood in January, trying to get our HIB30 miles in. We did okay, until I got sick and just stopped caring.
11. My friend wrote a play! And it got published! So, I bought a copy. One of my goals this year is to support my friends who create things by buying their work. $$$ 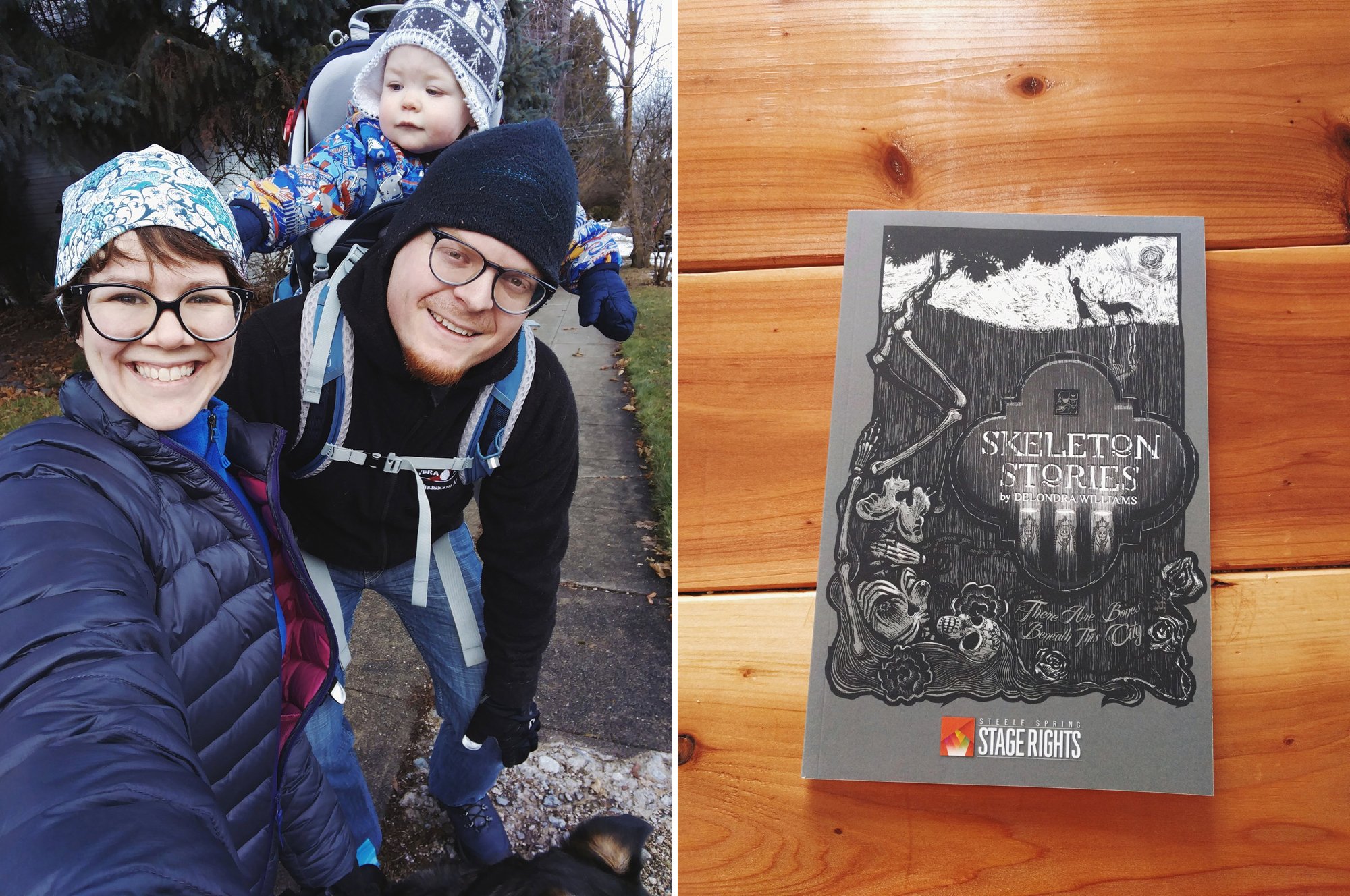 12 & 13: Asleep & Awake. I seriously could write a long song to our Clek carseat. N has been in it since birth, she’s rarely hated the car (and the worst trip we ever took, she was in her cheap-o travel seat), and she naps like a boss on road trips. She loves this seat and is always happy to be in it. I also feel like it sits up a lot higher than our other seat, so she can see out the window!

14. We stopped at a toy store and they had GIANT versions of our Jelly Cat bunny and N was in love. She was so bummed when we left without getting her one. Sorry, kid. She kept pulling them off the display and full on body hugging them on the floor. I don’t know why, but this kid loves her bunny!
15. We’ve had Shadow for more than 2 years, and this is one of the first times Lola has slept in his bed with him (she regularly poaches it when he’s not around). It hasn’t happened again since then, but I’m still holding out hope that they will become BFFs. 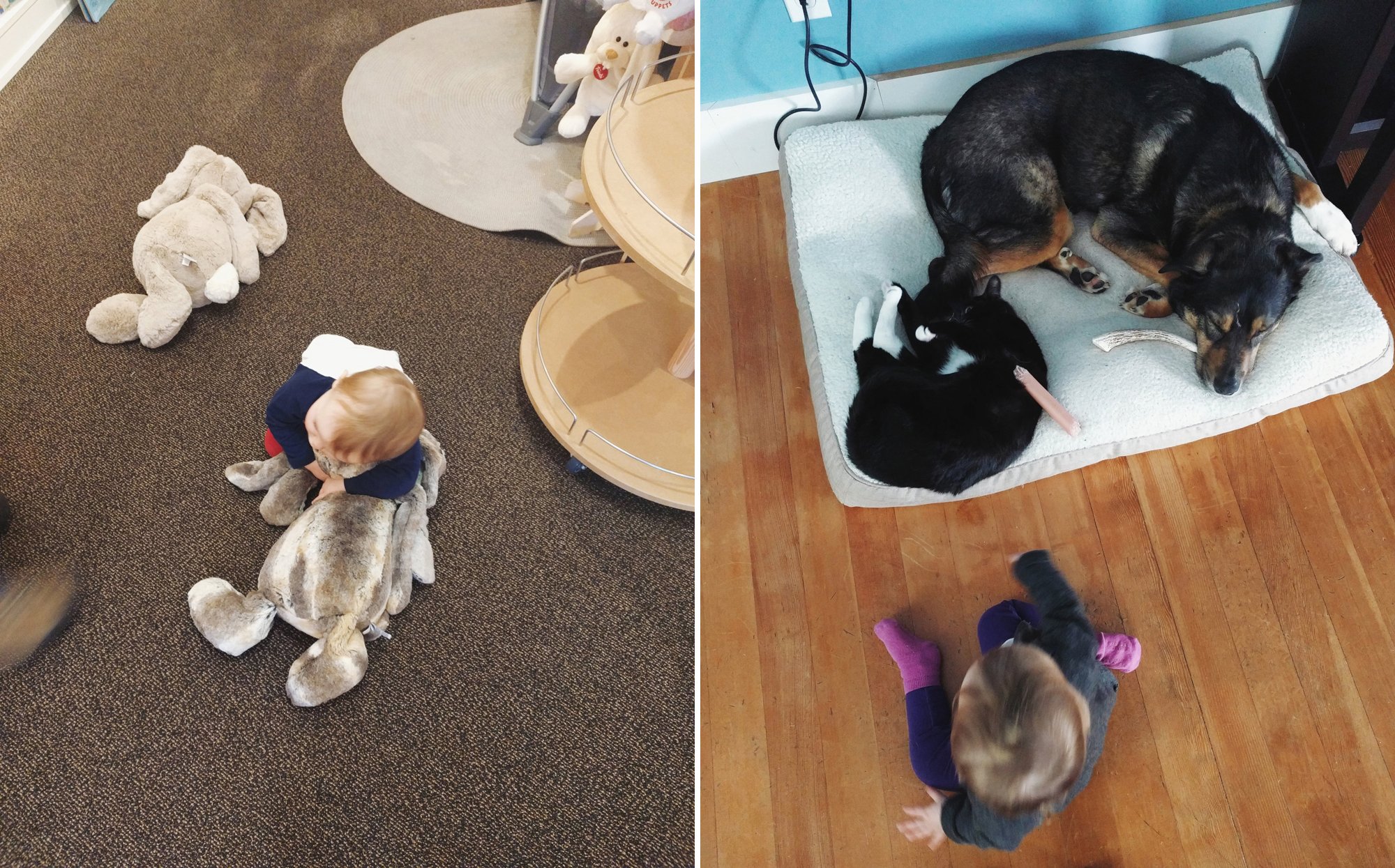 16. This one is blurry because I was laughing so hard when I took it. N has taken to poaching my scarves, especially my infinity scarves, and wearing them. She then crawled under my desk while I was working and started chatting away while poking at my computer. Luckily, she didn’t turn off my power strip (that time. She’s done it since and now doesn’t get to go near there). 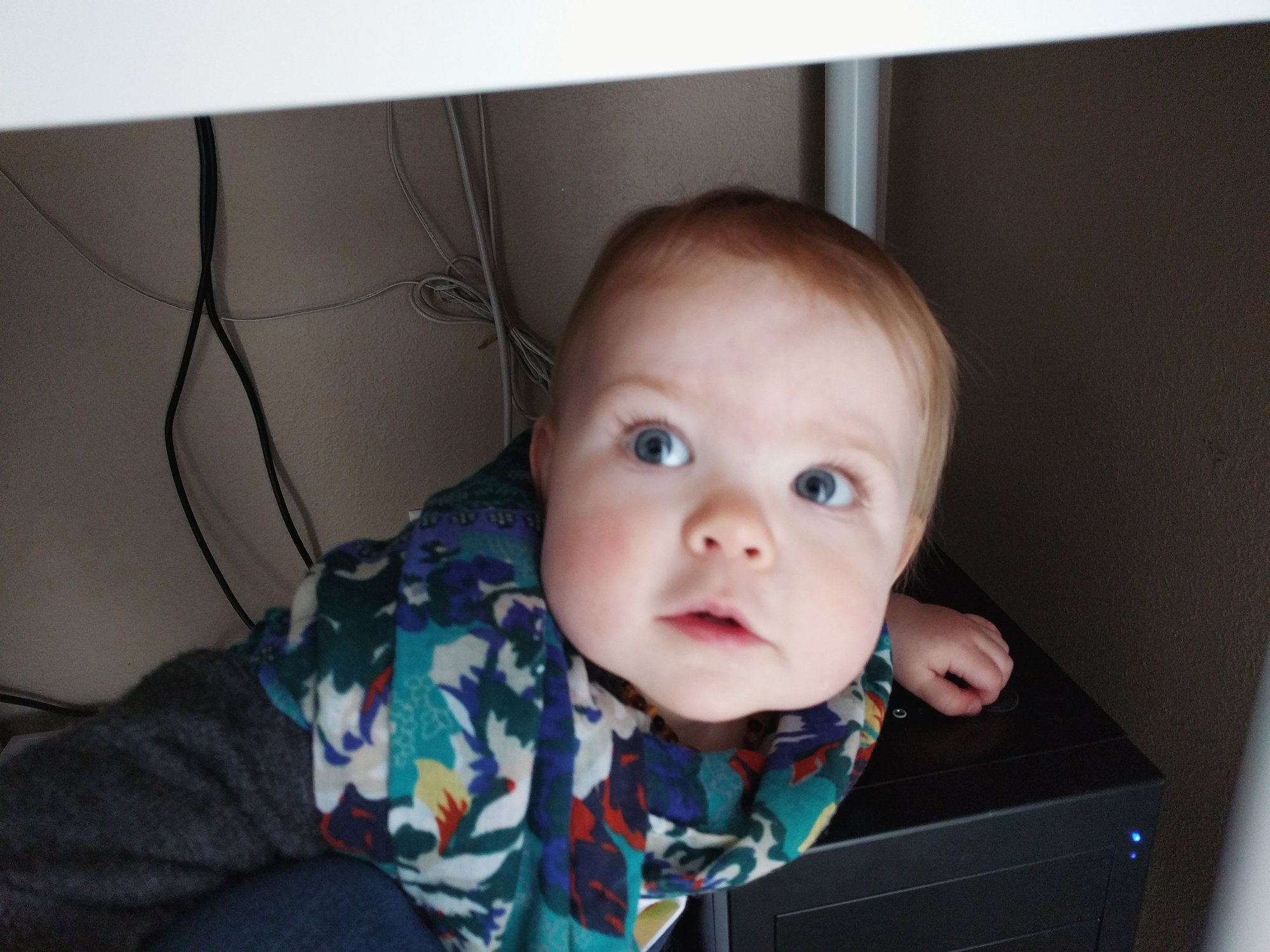 And that was January! I can hardly believe we’re more than halfway through March now!! I need to get the February post up too. Haha, maybe I’ll get it done before April?!?!