Okay, I know I’m way behind on these, but combining two months makes these posts ridiculously long and then I get overwhelmed by all the stuff that has happened. Maybe this is the month when I catch up?! A slacking blogger can dream.

So, February. We went to Hawaii. The weather was bonkers, Maui was still beautiful, and of course the weather was fine while we were gone but snowed when we came back. NOT funny, Spokane. Sadly, our kiddo was not as big a fan of the beach as we were, so I guess we’ll have to try this again next year and see if she does better? I’ll be hunting for more plane deals.

1.  This is bunny. Bunny is a lovey we picked up on an adventure (we have a backup, don’t you worry) who goes basically everywhere with our girl. She sleeps with him now, and loves to give him kisses, so of course, he protected our snacks for the flight. He’s a good friend!
2. I picked up this Yumbox a while ago for days when N needs to take a lunch to the nanny. It was a bit more expensive than some of the other ones we looked at, but I can attest to it’s leakproof status! We’ve packed yogurt and applesauce in it a bunch, and once, canned peaches without leaks. We took it with us to Hawaii, and it was nice, because N knew that it was her lunch box for days when we went to the beach. Also: we spent a lot of time hanging out together on the beach, because it turns out my kid didn’t like sand and thought the ocean was too big and scary (fair point, kiddo). Our trip didn’t go exactly as planned! 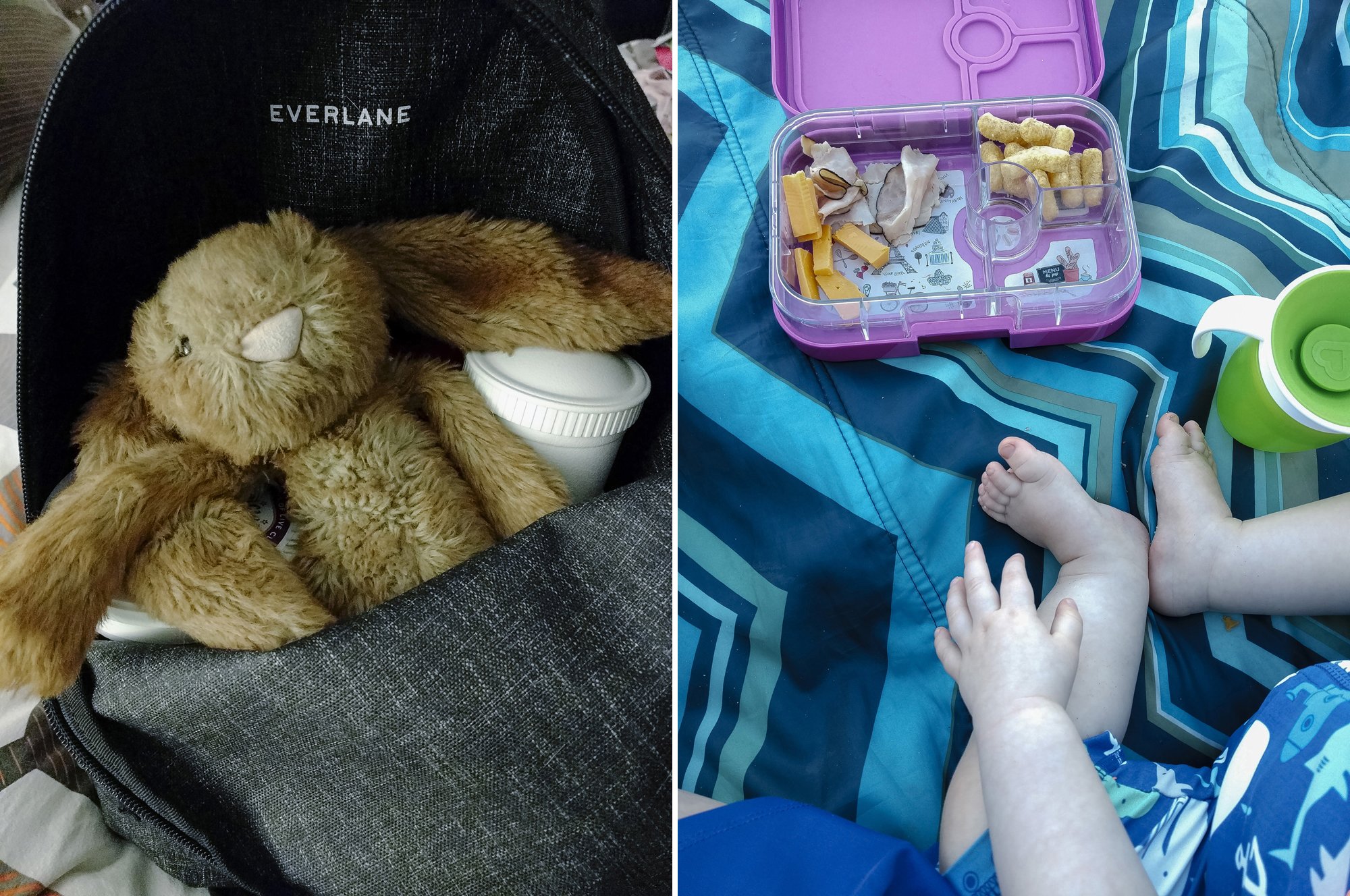 3. Someday I’m going to start a blog that is basically a journal of our adventures in traveling and renovating. And then I’ll really talk about how we ended up with seats for our lap infant on 3 of the 4 flights we booked. Here, N and I sat together on the short hop to Portland (it’s a Q400 plane, so 4 seats in a row, with a single aisle, H sat ahead of us).
4. Here we are on the long haul flight from Portland to Maui, where we ended up with an empty seat. Since we were already bringing the car seat, we planned to gate check it for any flights that we didn’t have a seat. We had a seat for all but the last flight, which was from Portland back to Spokane. She fell asleep shortly after the plane took off when we flew from Portland to Maui, and napped for a couple hours. Then she slept basically the whole way home (we were starting our descent) from Maui to Portland. I always pack her a couple books (a bedtime book and a couple favorites for her to read) plus a small bag of toys. I try to find something small and new for each trip, and hope that she’ll love it. Sometimes it works, sometimes it doesn’t. As you can see, bunny was our faithful companion here too.

5. The one thing we really screwed up on was naps. N still naps with a sleepsack, and it was just a tiny bit too warm in Hawaii for her “isn’t it February still?” body, especially since we goofed and brought her winter weight one. The temp was only 2-3 degrees warmer than it is back home, but that couple degrees plus the humidity was all that she needed to be miserable. She napped and slept really poorly the whole week, and slept best in a baby carrier or on my chest. I did get some good reading in while she napped on me, but it ruined my plans to sneak off to doze on the beach while she napped at the house.
6. The start of a nice sunset over Lanai from the restaurant we ate dinner at one night in Lahaina (which was okay but not great). I will say, our kid was a champ at eating out and hanging out, and she got her first taste of ice cream that night. It was almost worth the dozen mosquito bites I ended up with.

7. The view from a late lunch/early dinner at Frida’s Mexican Beach House in Lahaina. Which I would hands down 100% recommend. My husband ordered octopus, which I think is gross. I’ve tried octopus a half dozen times and never liked it. But this octopus was tender and perfect and I would order it. [In case you’re wondering, I had the tacos with the catch of the day and something else that I can’t remember, our friend got the Diego’s plate, I think, and we also ordered the corn cotija and the ceviche. All of it was amazing!] Seriously, best meal we had on Maui. Well, except for that Loco Moco I had at Down the Hatch. Those were probably the best two meals I had that entire week, although a lot of it was pretty good. Which reminds me that I need to try making some Loco Moco at home, because N was also a huge fan!
8. I successfully transferred N from a back carry in the Tula to the bed for a nap and I was so proud of myself. This kiddo was not a fan of the beach (she did much much better in March when we went to Prague. I guess she’s a city girl!) and yet, she was still a total trooper. 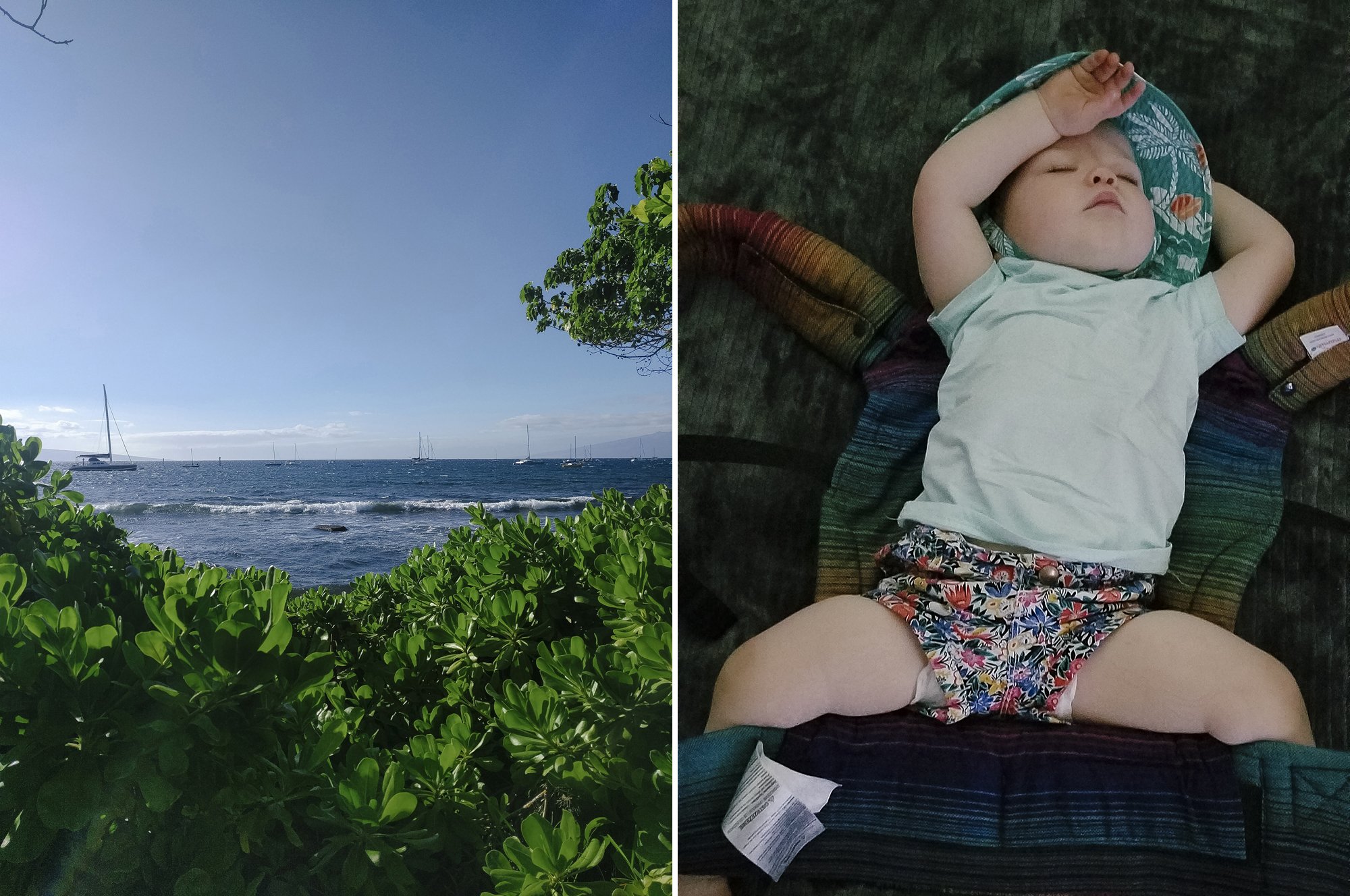 9. N and I had our first shave ice at Breakwall Shave Ice – next door to Down the Hatch – and while she wasn’t a fan, I could see the appeal – especially after a long hot day in Maui!
10. On our last day in Maui, we were on an overnight flight (but had to check out before 11am), so after lunch, we went from Lahaina down towards the road to Hana. But by the time we got to Big Beach, N had woken up and was not happy to be stuck in the car any long. So we turned around and were going to head to a beach to hang out near the airport. Instead, we realized we were only a few minutes from the Maui Ocean Center. A couple turns later, we were inside and she was enthralled. From the jellyfish tank to the huge aquariums with living coral, this girl was oohing and aahing for almost three hours (we had to leave because they were closing). Plus, after running all over the place, inside and outside, she was beat.

11. Back in Spokane just in time for it to snow. I took advantage of fresh snow and hit the dog park with Shadow one afternoon while Natalia was at the nanny.
12. Jet lag is rough, and sometimes you need a mama snuggle and a cat nap right before dinner.

13. Leftover rice and eggs in a bowl I picked up at the Spokane Potter’s Guild Chili Feed. I’ve been loving this bowl, it’s the perfect size for a small lunch or leftovers.
14. My girl and I rocked the stripes together and she loved watching me put on my red lipstick. 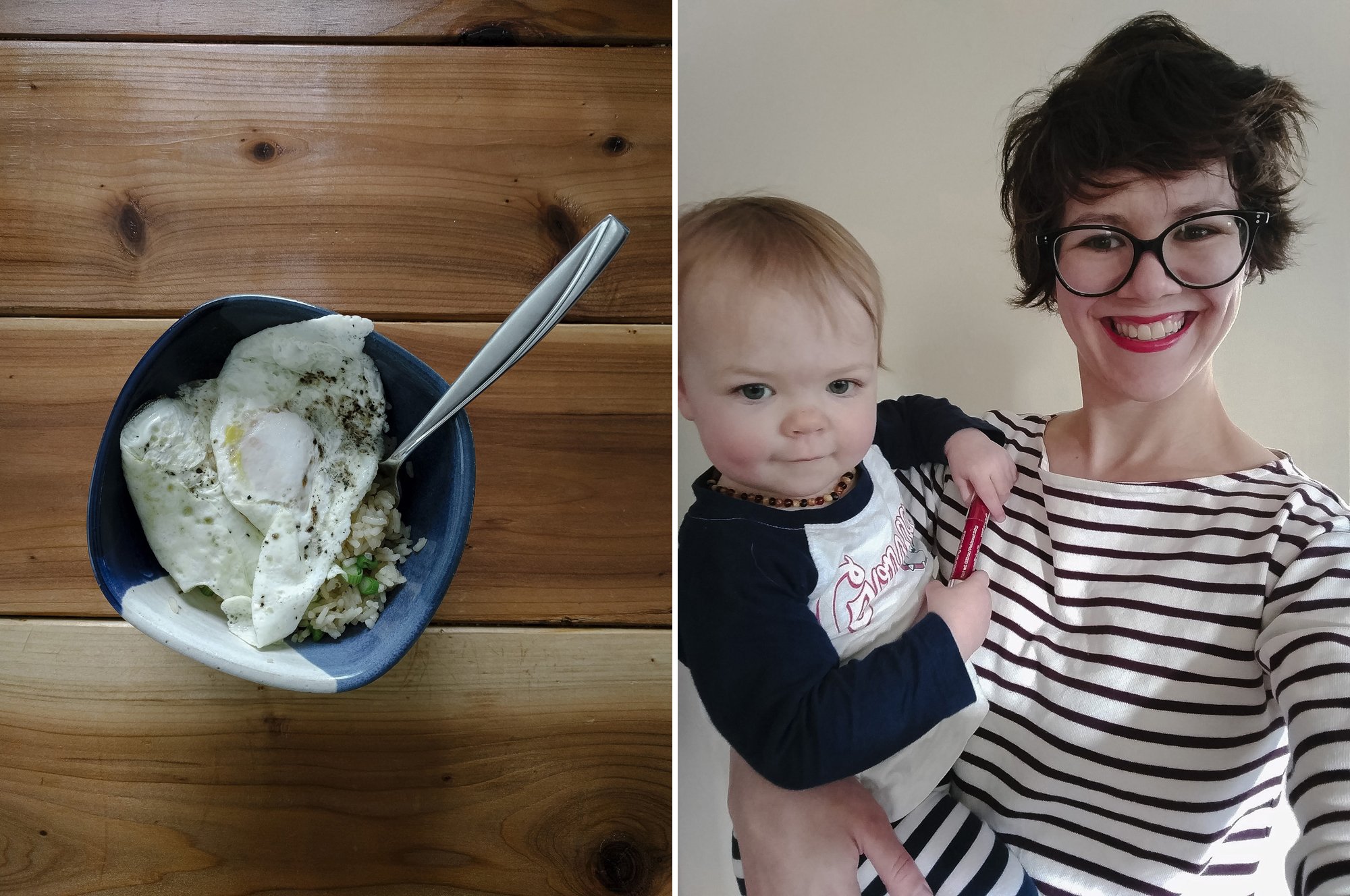 15. We took N to her first hockey game, and I think she’s a fan! She alternated giggling at the ladies behind us and watching the puck go from end to end, pointing it out to me. Although, if she could talk, she’d tell you that the highlight of the game was seeing Boomer as we left the stadium. She was in love with him, and it was adorable!
16. My little assistant and I on the way to a meeting with a couple vendors about Spokane Headshot Day.

And, just like that, it was March! February flew by – and I’m not just saying that because we racked up some miles and it’s the shortest month – because it was so full of stuff going on. We snuck in a trip or two to Mobius as well, but I never have a chance to photograph her there anymore because she just goes and goes and goes!

Some of the links are affiliate links. I only recommend products I use and love (or ones I’m looking to get). The small amount of money I earn from affiliate links helps me take this kiddo on more adventures.