August. The month of smoke, blistering hot days, and more smoke. Oof. I pitched taking our big vacation next year in August, even though I know that doesn’t work with my business, because I didn’t want to deal with another smokey summer. It’s so bad!

Because of the nasty weather, we spent a lot of time indoors and I had a pretty cranky kiddo on my hands. We could not have survived the month without babywearing, and I wore her A LOT.

1. I finally figured out how to back carry in a ring sling and N thinks it’s the best. It’s not my favorite back carry, but in a pinch, it’s nice to know that I can easily give her front snuggles or toss her up on my back.

2. Babywearing is the only way we survive, especially when someone skips her nap because she’s too excited about going to grandma and grandpa’s house. 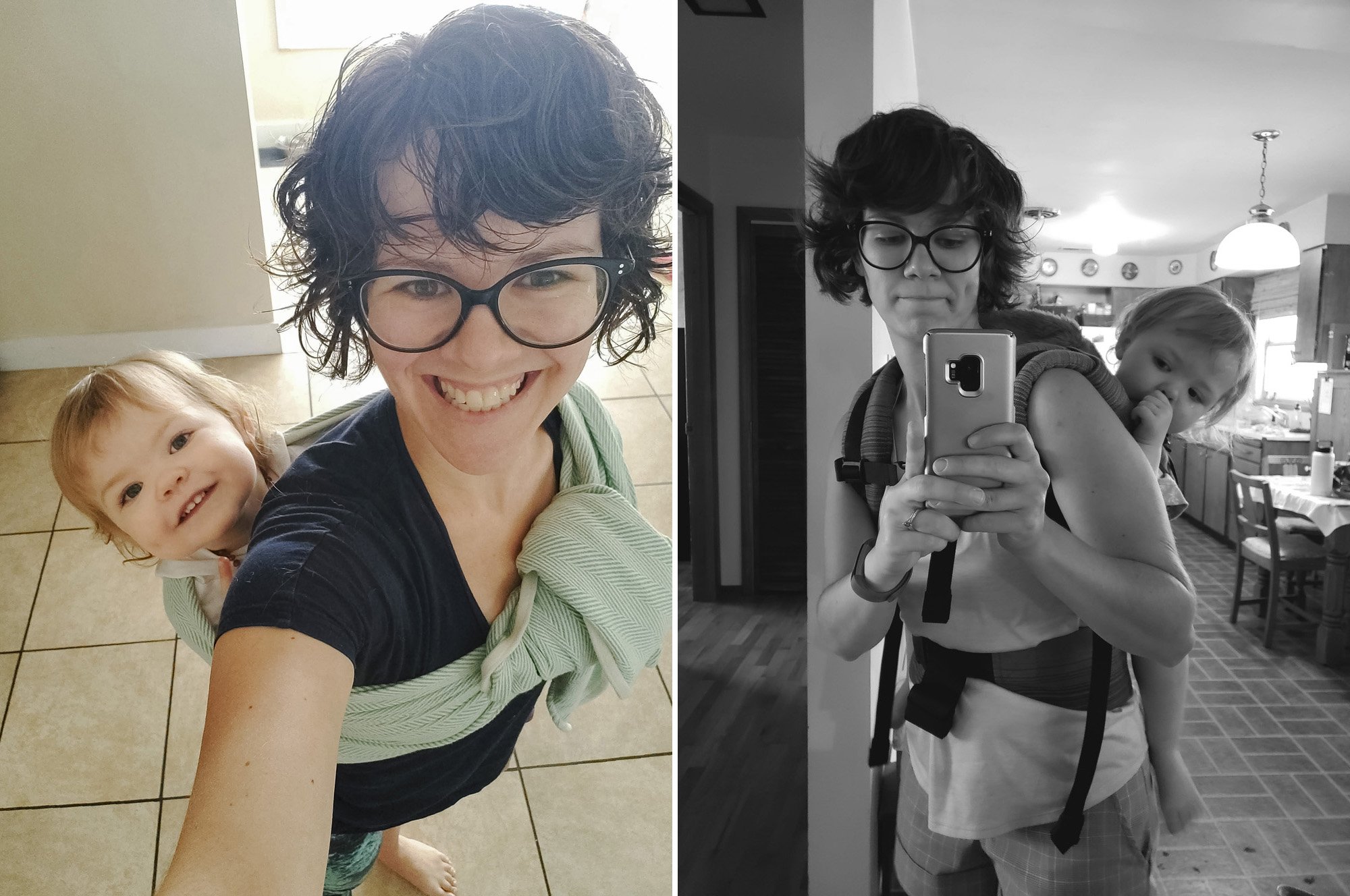 3. On the days when it was hot – but not yet smokey – we spent a lot of time hanging out on our patio in the evenings after N went to bed. I’d curl up in the hammock and we’d stare at the stars. I also found out that I can do longer exposures on my phone, which was fun. Still perfecting them, but I was pleased with this first attempt.

4. More babywearing, in a new sling, after a trip to Mobius. We would NOT have survived smokey days without Mobius. Best money we’ve ever spent. 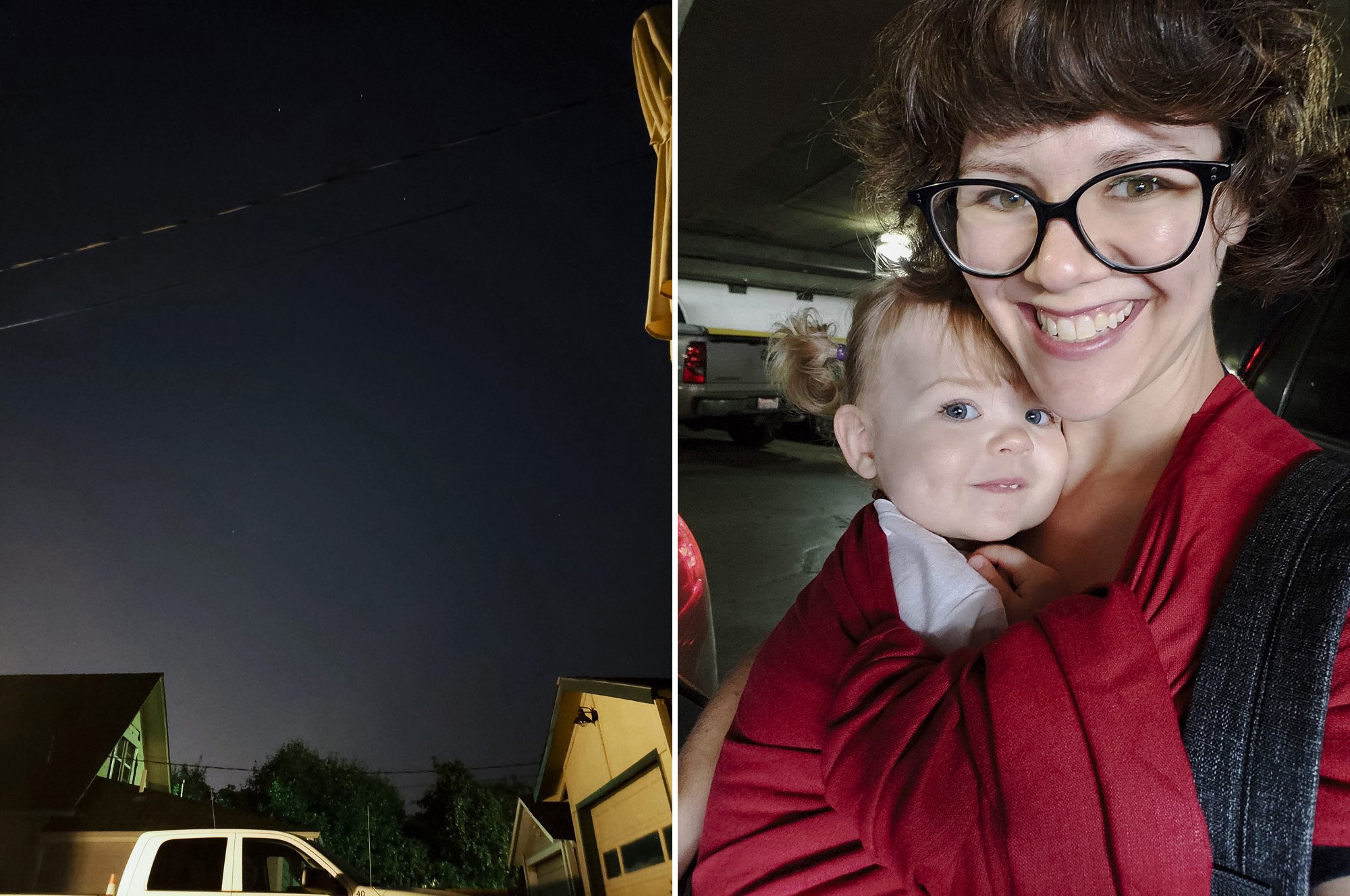 5. Tomato haul. We had some good producers this year, and we also ended up with a glut of tomatoes while house sitting for a neighbor. One day, I picked nearly two pounds of just cherry tomatoes! And then I did it again the next day…! Most of them were made into tomato sauce, which will be amazing on cold winter days.

6. Very very rarely does this girl need me for naps anymore, but after a busy morning, she woke up from her short nap only to cuddle me up and pass out again. I decided to soak up the snuggles because when did she get so big?!?! Aaaaaahhh. 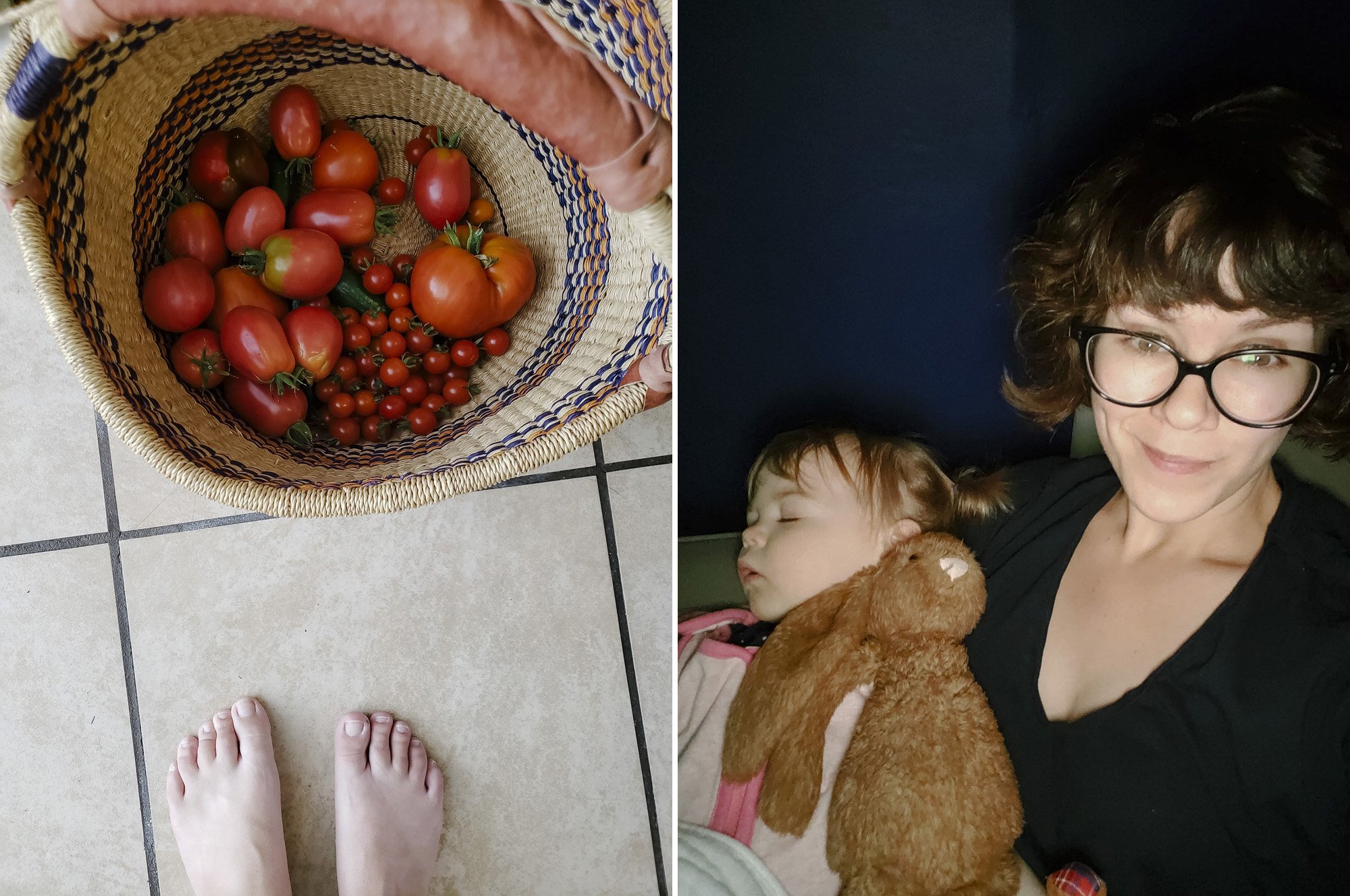 7 and 8: N and I took a day trip to Seattle to visit a friend of mine who was in town from Czechia. He was passing through on his way to run a relay race, and so we decided to fly over for the day and hang out. This is me on the way to the airport, and on the way home. It was a looooooong day, but it was also a really good day. She didn’t nap well, but she was still a pretty good kiddo for me. We’re planning on doing more mother-daughter solo travel next year, and this gives me hope that I can do it all! 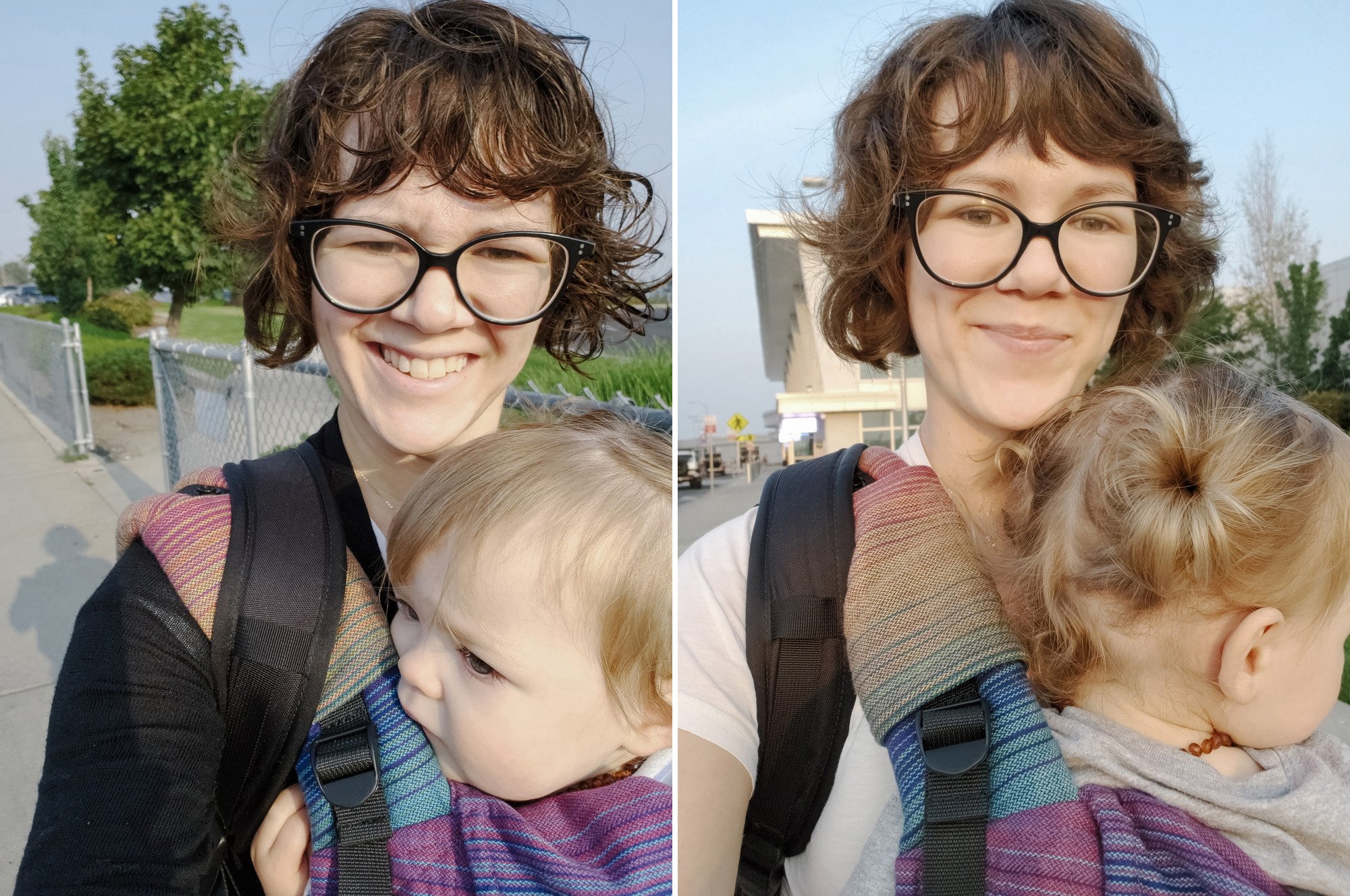 9: While in Seattle, we decided to visit the aquarium. N is absolutely obsessed with fish and anything in the water. She was in heaven, and I had the hardest time keeping up with her. She flat out ran from tank to tank to point out all the fish, adored the sea lions and the otters, and then properly collapsed in my arms on the train back to the airport – where we of course ate some mac & cheese while waiting for our (delayed) flight home.

10. We tried to put in one of those in wall tunnels for our tv cables, but ya’ll, old homes are strange and we ran into some obstructions in the wall. In order to properly skim the patches, I decided to skim the whole area. It’s now painted and I even moved the TV over above the piano (we don’t watch TV that much). I need to get an updated photo, because we’ve hung a bunch of art up on the walls now, and it’s looking so good!! 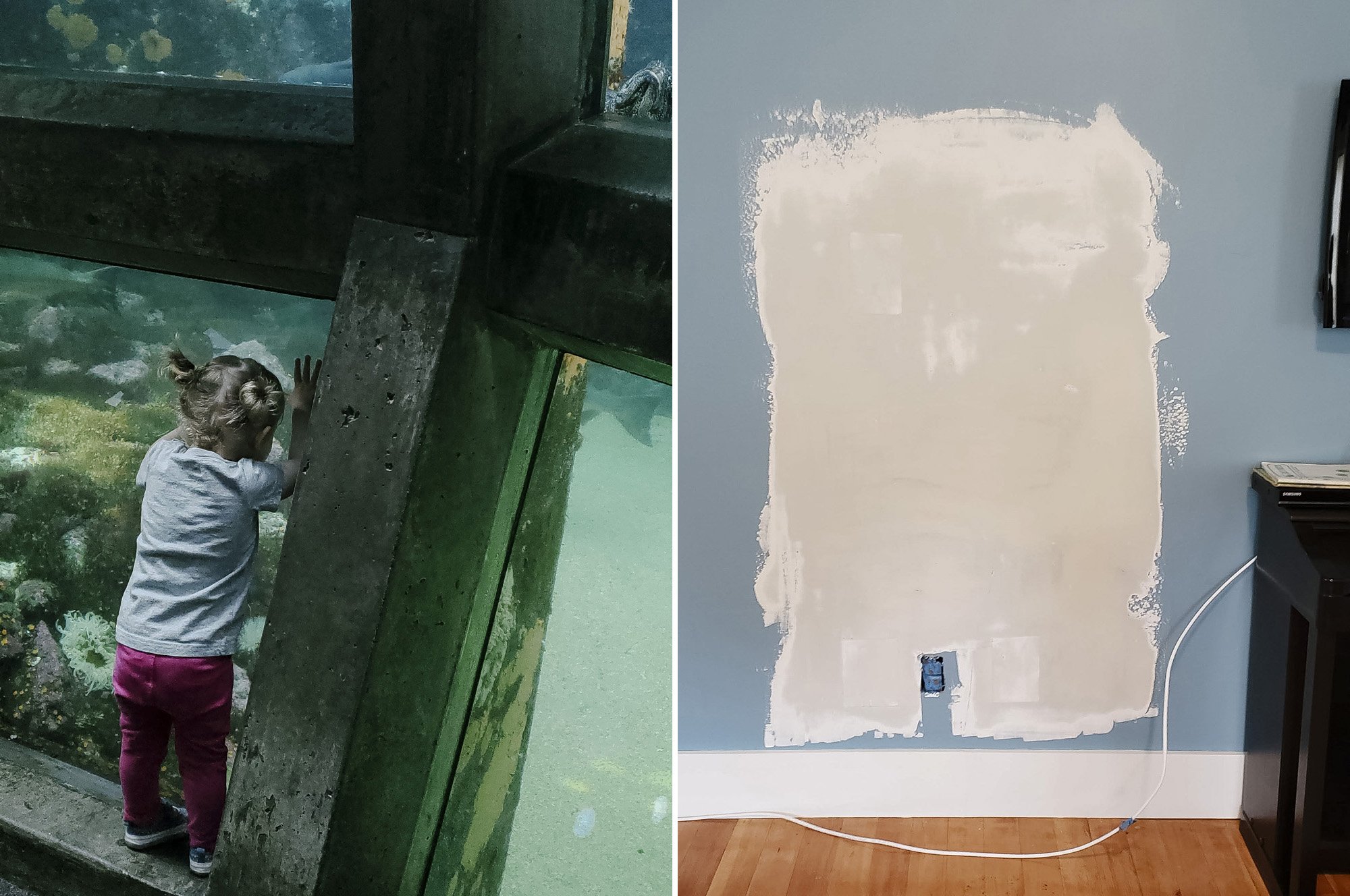 11. We had one morning where it maybe dropped into the 60s? And N insisted on wearing her boots, jacket, and wool beanie when we went out to pick the garden. She’s been my little garden assistant this summer, helping me pick all of our produce, and I can’t wait to have her help me plant the garden next spring! [Also: one of our trees! That one is a peach tree]

12. One of the varieties of tomatoes we planted this year ended up growing HUGE tomatoes. This wasn’t even the largest one we picked, but here it is against a toddler for scale. It’s basically a pumpkin, haha! The variety is an Italian Heirloom, if you’re interested. We liked them, they were good to eat and didn’t have too many seeds, which I love since we mainly harvest our large tomatoes for making sauce for the winter. 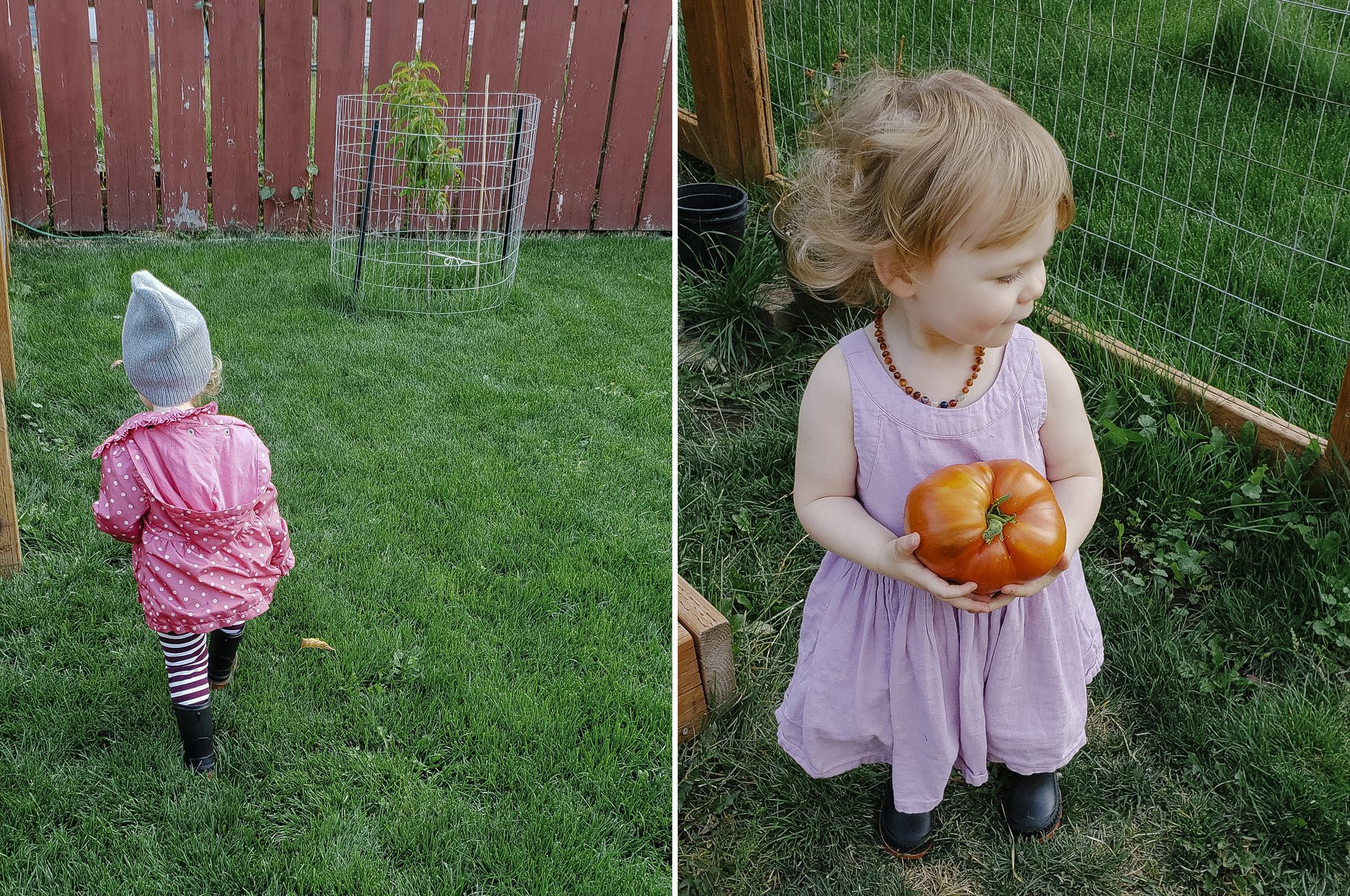 13. Another cool morning, another use for a sweater (knit by my grandma for my cousins when we were kiddos) and her hat. She only wanted to walk, so we did and she had a blast watching all the trash trucks come through the neighborhood before playing on the slide and swings.

14. Helping me unpack some new memory cards. This girl is my big assistant in my office, and while that sometimes means I can’t find what I’m looking for, I love that she comes in and plays so that I can get a bit of work done while I’m home with her! 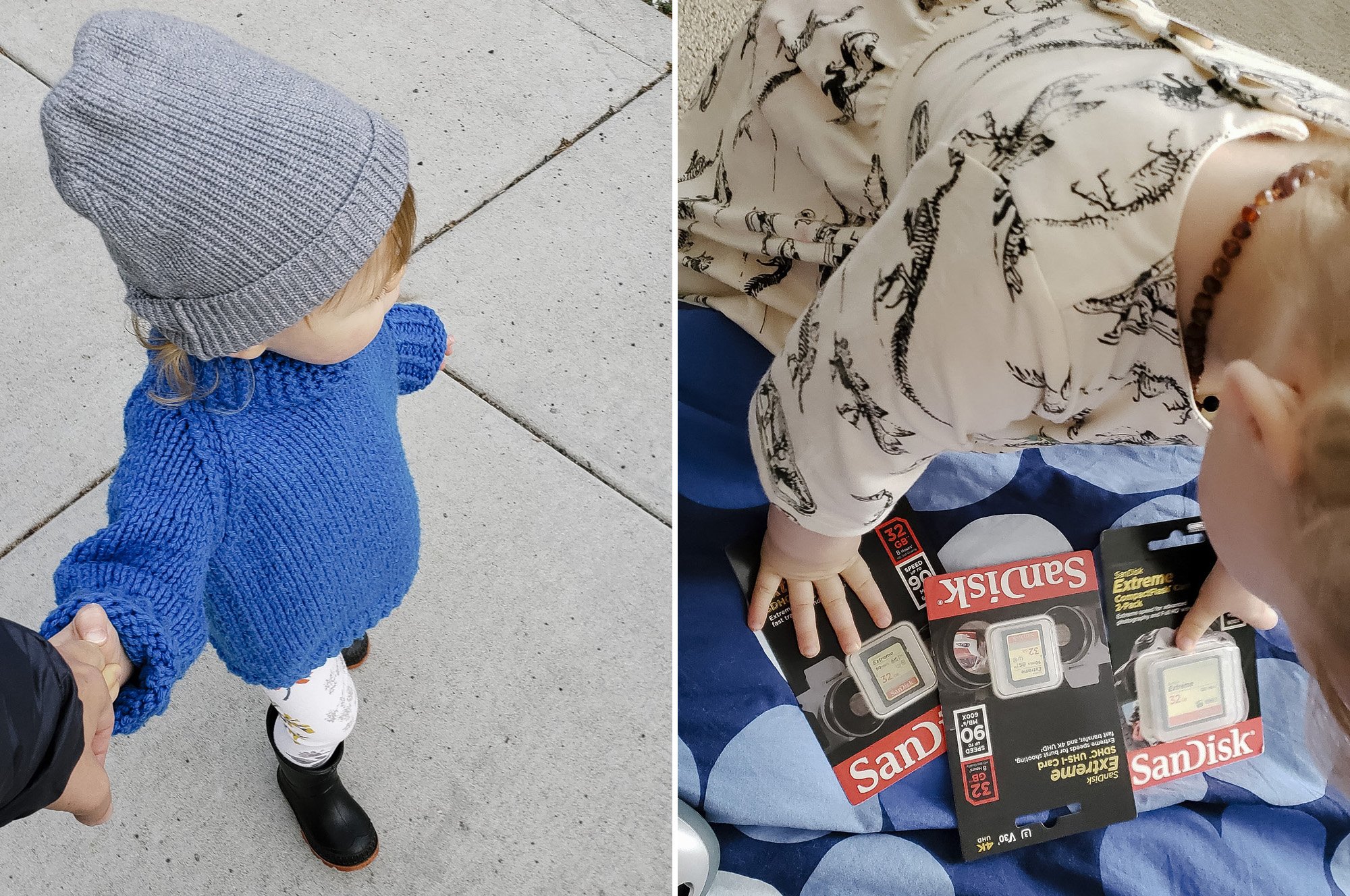 Whew! And that was that. August was a bit of a slower work month for me, which was nice because I had a bunch to catch up on from July and now September and October are really busy too. I can’t believe it’s almost the end of the month and it’s FALL!!